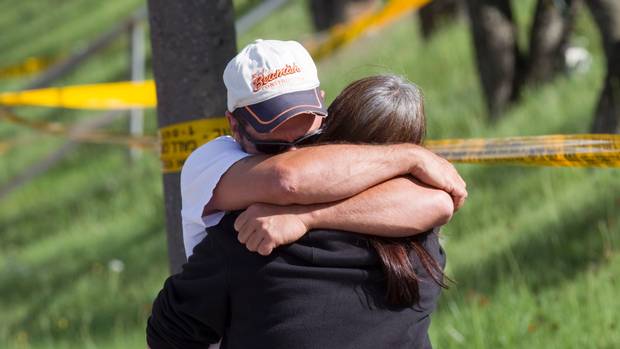 TORONTO and SUDBURY — Rescuers will try “drastic” measures to reach possible survivors in a collapsed mall, acting at the urging of the community and Ontario’s Premier after search-and-rescue operations were suspended over safety fears.

Crews who just hours earlier were pulled from the Algo Centre Mall in Elliot Lake, Ont. will have another go at the structure relying on machinery, said fire chief Paul Officer.

Officials believe there is one person dead and possibly at least one still alive in the wreckage. Reaching them could require methods that are “a little more drastic, that aren’t necessarily done in a rescue operation – or even a recovery operation,” Chief Officer told a news conference Monday evening. “And we still have to come up with that plan.”

Earlier in the day emergency responders detected evidence of someone breathing, trapped beneath concrete slabs and debris. But examinations of the collapsed structure suggested it would be too dangerous.

“It’s not safe for us to put the workers back in there, because this could be a devastating collapse,” said Bill Neadles, spokesman for Toronto’s Heavy Urban Search and Rescue, which travelled north to Elliot Lake after the collapse on Saturday afternoon.

The mall’s roof has caused concerns before. Ontario’s Ministry of Labour visited six times since October 2009 – most recently last January in response to complaints about a leaky roof. But the mall’s owner told The Globe and Mail Monday that the roof passed inspection last month with no safety concerns.

At least one person was killed when the rooftop garage at the Algo Centre Mall crashed through two floors Saturday afternoon. At least 22 people were injured and as many as 30 were reported missing. Ontario Provincial Police say they found cars belonging to two people on that list parked at the mall.

Early Monday, rescuers said they detected signs of life. Someone was breathing, buried somewhere under the rubble. Over several painstaking hours, crews covered about 100 metres, getting within about 30 metres of where they thought the person was.

But the structure was far from stable. The wooden beams propping up the shifting escalators buckled and bowed, said Mr. Needles. The Heavy Urban Search and Rescue team is specially equipped to provide swift help in tight spaces – mine shafts, elevators, cranes and collapsed buildings.

It got to a point Monday where engineers couldn’t determine what might fall next. The danger to rescuers, they decided, outweighed their chances of rescuing someone alive.

“It’s not safe for us to put the workers back in there, because this could be a devastating collapse,” Mr. Neadles said. “To put that OPP officer in that bucket and drop it down within metres to where he has to do that examination, I’d then have to put a team of safety officers on the roof, which I just can’t do. It’s just not safe.”

That means the site becomes the focus of a Ministry of Labour investigation. The mall’s owner needs to give ministry inspectors an engineer-approved plan for safely dismantling the structure, Mr. Needles said.

The Ministry of Labour last dealt with the Algo Centre Mall in January, responding to a complaint about a leaky roof, according to ministry records, which note that the employer in question “provided information regarding ongoing maintenance planned and permanent fix for spring/summer 2012.”

Prior to that, the ministry visited five times in less than three years. Four of those visits were in response to complaints about leaks, plumbing and mould.

A 2008 article in the Elliot Lake Standard features a photo with a design and engineering team charged with fixing roof problems that had “plagued the building for many years.” That plan – to open up the roof and check, repair, waterproof and repave the structure – never materialized. Harry Hakomaki, whose contractor won the winning bid, says mall owner Bob Nazarian wouldn’t provide a bank statement proving his ability to pay. Mr. Hakomaki said he thinks someone else did the work.

Reached by The Globe Monday, Mr. Nazarian said he couldn’t comment on the mall’s collapse but said there had been an inspection at the mall last month. He wouldn’t say who did the inspection, but said there were no safety concerns raised at the time.

Sarah Ball, who works at Mum’s Place in the mall’s food court, remembers those inspectors. She asked them, as they stopped by for coffee, how the roof was. “A-okay,” they replied.

But in the four years Ms. Ball worked in the Algo Centre Mall, she said, leaks have been a near-constant presence. Plastic bladders and hoses were set up to drain excess water, she said; moisture damage creeping up one wall left brown spots of decay that were plastered over.

Ms. Ball, eight months pregnant, was working cash on Saturday and watched transfixed as a creaking drumroll sound was followed by the deafening crash of concrete and drywall plowing through the roof onto the mall hallway – “the whole thing caving in on me,” she said.

She ran for the freezer, the most solid structure nearby. In the silence that followed, she crept out and helped others, bloodied and disoriented, to safety through the restaurant’s back door, which leads onto the mall’s patio. What preoccupies Ms. Ball now is the friend she’s sure is still there, beneath the concrete slabs.

A 35-year-old woman who sold lottery tickets was on duty when the roof collapsed around 2:20 p.m. Saturday, directly onto the area around the mall’s ticket booth. She had recently gotten engaged.

Ms. Ball still isn’t sure which of her friends are missing.

“Working in the food court, serving these people every day…. I keep running through my mind, ‘Who was there?’ “