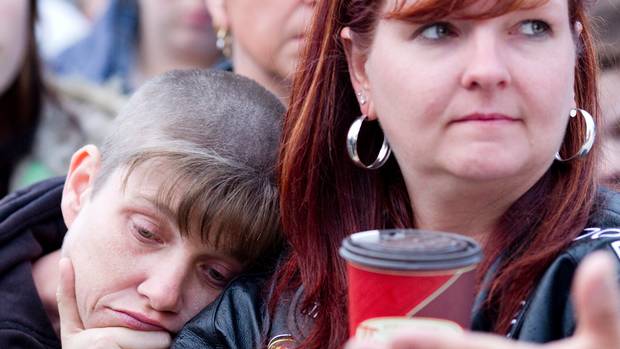 Rescue crews have been called off the scene of a fatal mall collapse in Elliot Lake, Ontario: The structure is simply too dangerous to send people into.

Ontario Provincial Police and crews from Toronto’s Heavy Urban Search and Rescue spent hours making their way through the rubble of the mall, which collapsed Saturday afternoon, killing at least one person and injuring more than 20.

Earlier Monday, search and rescue spokesman Bill Neadles said they’d detected signs of life – at least one person was breathing underneath the slabs of concrete and twisted metal. At one point, rescue crews were within 30 metres of the person.

But the structure became increasingly unstable: Wooden beams used to support shaky escalators started to buckle and bend. Slabs of concrete were shifting.

“It’s not safe for us to put workers back in there,” Mr. Neadles said. “To put that OPP officer in that bucket and drop him down … I’d have to put a te am of rescue officers on the roof. It’s just not safe.”

Even manoeuvres using a rescue dog would be too risky, Mr. Needles said.

This makes the effort largely a recovery mission. The site is turned over to local authorities and the Ontario Labour Ministry, which will conduct an investigation because it’s a worksite. But first, the mall’s owner will need to come up with engineer-certified plans on how to dismantle the rubble safely.

Mr. Needles said late Monday afternoon he doesn’t know the status of the person they thought was still alive. “Nobody’s happy that we’ve had to stop work,” he said.

Ontario Provincial Police Inspector Percy Jollymore said that while the list of missing persons has fluctuated wildly, police are focusing on two people who would have been in the mall and whose vehicles were parked outside.

Elliot Lake Mayor Rick Hamilton declared a state of emergency Saturday after the roof, which serves as a parking lot, crashed through two floors of the shopping centre, exposing twisted metal and concrete supports and triggering a gas leak. The Ontario Provincial Police emergency team were deployed to the area, as were about 40 specialists who make up Toronto’s Heavy Urban Search and Rescue team.

Several Elliot Lake residents the Globe contacted, including mall employees, spoke about the mall’s persistently leaky ceilings and said they felt the building was dangerous long before Saturday’s collapse.

Mr. Hamilton declined to answer any questions about past maintenance issues at the mall, and whether any of these problems had ever been raised with local politicians.

Pressed for details on these issues, as well as any information about the mall’s owner, Mr. Hamilton repeatedly said, “We’re focusing on the rescue.”

For residents of Elliot Lake, it was a weekend of hope and frustration. The shopping centre houses the city library, various government offices and a grocery store. It is also a structure, some say, that has shown signs of disrepair over the years.

Residents, taking stock of the weekend incident, wondered if it could have been avoided. The local newspaper, The Standard, has reported on leaks and other deficiencies at the mall, saying that owners spent $1.1-million recently to plug roof leaks. But residents contacted by The Globe and Mail spoke about persistent leaks despite the infusion of cash.

Heather Richer was serving a customer at her restaurant, Mum’s Place, when the ceiling nearby collapsed. “We heard a great big bang,” she said. “You look up and the mall’s gone. It caved in … water flowing everywhere, everything was down around us.”

She said there were maintenance issues and leaky ceilings, including in her restaurant.

“There [were] holes everywhere, especially over where the roof had fallen in,” she said.

Yves Bérubé, co-owner of a jewellery store, was on a cigarette break outside the mall when the roof gave way.

“The doors blew open and a big cloud of dust [came] flying out,” he said. “It was like something you see in a horror movie.”

Mr. Bérubé ran back inside to assist in getting people out, including an elderly woman and a man who had been cut.

“Once we had everybody, we got out of there,” he said. As for his store: “The front end of my store is gone, from what I’ve seen.”

With a report from the Canadian Press