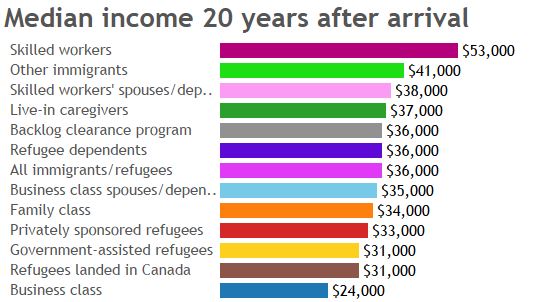 Much of Canada’s conversation around refugees — whom do we take, when and how many? — has focused on the assumed cost of the initiative.

We’ve dissected some of the most common misconceptions around what refugees actually get in terms of assistance, and what they’re required to repay once they arrive in Canada.

READ MORE: No, Canada doesn’t spend more on refugees than on retirees

But what about the other side of the equation — how do refugees fare in the years and decades following their arrival?

The figures also indicate the way your entry to Canada can influence your financial trajectory afterward.

READ MORE: Some Canadian refugees are more equal than others

Within five years, 57 per cent of government-assisted refugees, 65 per cent of refugees who claim asylum once they’re in Canada and 70 per cent of privately sponsored refugees reported employment income.

And the percentage of refugees earning employment income rises the longer they’re in Canada:

GALLERY: Click through to see the percentage of new Canadians with employment income in the years after they arrive

At the same time, newcomers’ reliance on government assistance decreases the longer they’re in Canada.

GALLERY: Click through to see how new Canadians’ use of government assistance changes in the years after they arrive

New Canadians’ median employment incomes also rise precipitously in the years following their arrival in Canada. Overwhelmingly, people who came to Canada in 1993 were earning more than the median Canadian by 2013. That includes refugee dependents and privately sponsored refugees.

GALLERY: Click through to see how new Canadians’ employment earnings change in the years after they arrive

There’s one significant exception, however: “Business class” or “investor” immigrants who’d been in Canada 20 years reported the lowest employment income of any immigrant category in 2013.

They were also the least likely to report income, period: Only 26 per cent reported employment income on their tax forms.

Whether that’s the result of creative accounting or economic under-performance, it indicates just how poorly Canada’s attempt to lure high-spending businessmen panned out, says University of Ottawa professor Ravi Pendakur.

“[Citizenship and Immigration Canada] recognized it was a problem, because they essentially shut it down,” he said.

The program became, effectively, “a quarter-million-dollar fee for getting landed status.”

Or, Pendakur said, “selling citizenship at a really high price.”

“One thing that, at least in the past, that Canada has done really well is bring in a wide variety of people — different educations, different knowledge sets — and, by and large, people have done well.”

It doesn’t matter where you’re from — people with connections do better, professionally.

“There’s often a family reunification link — you have social capital,” she said.

But people who claim asylum once they’ve arrived in Canada — something the federal government discourages, especially over the past several years — also tend to do well.

That could be because they have the resources and wherewithal to make it to Canada on their own to begin with, Hyndman said.

“People who manage to arrive by plane at [Toronto’s] Pearson Airport, with all the proper documents, have sufficient means and sufficient cultural capital to get there,” she said.

“That group, overall, has the greatest number of obstacles,” Hyndman said.

“It’s important that people are set up for success. And it requires investments. And I see income assistance as an investment.”

That said, the figures indicate Canadian newcomers of all backgrounds have been astonishingly resilient when it comes to putting down roots.

The data bear that out: In 2002 Canada implemented a new policy that made it easier for impoverished refugees to get in. You’d think having poorer people make up a larger proportion of newcomers, the total pool of new Canadians wouldn’t do as well financially.

“Refugees coming in the 2000s were no worse off than people who came in the 1990s,” Hyndman said.

“Refugees are not just people who sit around.”