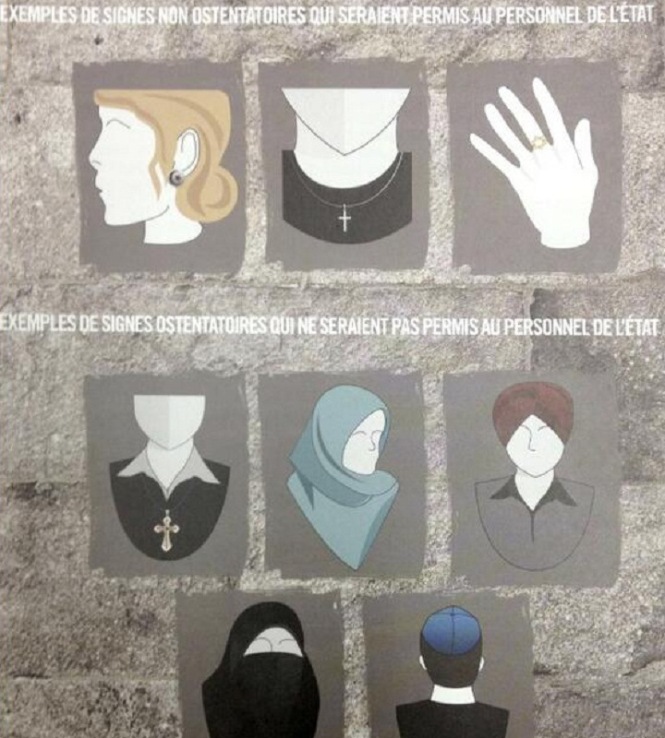 Canadians outside Quebec say they oppose that province’s proposed Charter of Values – but that doesn’t mean they’re comfortable with all religious symbols in the public sphere: More than two-thirds of respondents to an Angus-Reid poll released Wednesday would ban kirpans; almost as many would prohibit public servants from wearing burqas.

The poll was taken this week while Quebec Premier Pauline Marois was unveiling a proposed “Charter of Values”that would, among other things, prohibit public employees from wearing a hijab, turban, kippa or large crosses.

Marois has positioned her charter as a bid for “laïcité” – a commitment to separating church and state – in the face of what she characterizes as encroaching religious extremism if it isn’t pursued. She told reporters Wednesday she’s “very proud” of her proposal.

“We worked very hard on a plan that appears to me to be perfectly balanced,” she said. “Now, the debate is open. People will be allowed to express themselves.”

She has also indicated the proposed charter will be phased in, comparing it to the phasing out of religious practices at public schools.

The proposal has drawn ire from religious groups, politicians acrossthe spectrum and others who call it a xenophobic attack on minority rights in a province where immigrants are already struggling: Quebec has a bigger unemployment gap between immigrants and Canadian-born workers than any other province.

But the charter’s loudest detractors are predominantly those outside the province. There’s broad backing for laws prohibiting public employees’ religious garb within Quebec – 69 per cent of Quebeckers strongly or moderately support it. Even in Montreal, a multicultural bastion whose municipal politicians have decried Marois’s charter, most people said they support it – 41 per cent strongly.

The province’s influential civil servants union, which represents upward of 40,000 people, came out in support of the proposal this week.

Elsewhere in Canada, however, it’s another story.

Most non-Quebecois Canadians surveyed oppose the suggestion. But there’s some variation between regions: 44 per cent of Albertans like the law, a quarter of them strongly. So do 40 per cent of Ontarians. Almost two-thirds of respondents in Manitoba and Saskatchewan oppose it.

Support also varies by age, although not enough to tip the balance in Quebec: 56 per cent of people aged 18-34 like the law, compared to 24 per cent of their peers elsewhere in Canada.

Respondents with more education were less likely to like the ban, although it still wins over 58 per cent of university-educated respondents in Quebec.

The poll reveals sizable divisions between Quebec and the rest of Canada over whether public servants should be allowed to wear turbans and hijabs.

But they were closer to the same page on other faith-based wear: 68 per cent of Canadians outside Quebec say people in the public service shouldn’t be allowed to wear kirpans, the ceremonial knives carried by observant Sikhs. Two-thirds of ROC respondents would also ban burqas (full-body Muslim veils).

(90 per cent of Quebecers would ban burkas from public workers at work; 84 would do the same for the kirpan)

Both of these have been the subject of court cases wrestling with individuals’ right to wear them in the public sphere: A unanimous Supreme Court ruling in 2006 stated that preventing student Gurbaj Singh from wearing his kirpan to school would violate his right to freedom of religion, as outlined in Canada’s Charter of Rights and Freedoms.

“The risk of G using his kirpan for violent purposes or of another student taking it away from him is very low, especially if the kirpan is worn under conditions such as were imposed by the Superior Court,” the ruling reads, adding later that opposition to the wearing of kirpans on the grounds that they’re symbols of violence is “disrespectful to believers in the Sikh religion and does not take into account Canadian values based on multiculturalism.”

In late 2011, then-Immigration Minister Jason Kenney announced that women wearing burqas or niqabs (which cover the face but not necessarily the whole body) would have to take them off to take citizenship oaths.

And the Supreme Court ruled last year that a woman – identified only as N.S. – had to remove her niqab to testify against her alleged rapist in court.

“Wearing the niqab is also incompatible with the rights of the accused, the nature of the Canadian public adversarial trials, and with the constitutional values of openness and religious neutrality in contemporary democratic, but diverse, Canada,” the ruling reads.

But in her dissenting opinion, Justice Rosalie Abella raised a concern many are voicing in light of Marios’s proposed charter: What if the ban pushes people to abandon not religious symbols, but the public sphere, period?

“The harmful effects of requiring a witness to remove her niqab, with the result that she will likely not testify, bring charges in the first place, or, if she is the accused, be unable to testify in her own defence, is a significantly more harmful consequence than the accused not being able to see a witness’s whole face,” Abella wrote.