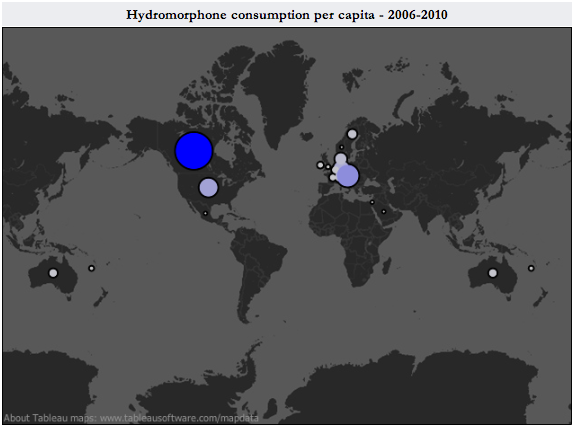 Click to compare Canada’s hydromorph contin consumption with the rest of the world.

United States drug czar Gil Kerlikowske issued an alert to law-enforcement agencies, warning that “the potential exists for diversion into the United States because the old formulations, which are easier to abuse, are unavailable in the United States,” the Wall Street Journal reported.

It wouldn’t be the first time divergent drug markets made Canada a source of trafficked pills: when Purdue Pharmaceuticals’ American arm replaced OxyContin with a tamper-resistant alternative in 2010, there was a “huge jump” in old OxyContin being smuggled over the border from Canada, says Jim Burns, assistant special agent in charge of the Drug Enforcement Agency’s Upstate New York branch.

“There were some organizations that stopped moving ecstasy and marijuana and just started moving OxyContin,” he said. “It was a very dramatic increase there.”

The surge stopped when Canada’s OxyContin was phased out in favour of tamper-resistant OxyNEO last year. Burns said he hasn’t yet seen an uptick after generic OxyContin came onto Canada’s market.

A study by the University of Wisconsin Carbone’s Pain & Policy Institute analyzing data from the International Narcotics Control Board found Canada leads the world in opioid consumption, if you’re measuring by potency – topping the U.S. overallfor the first time. 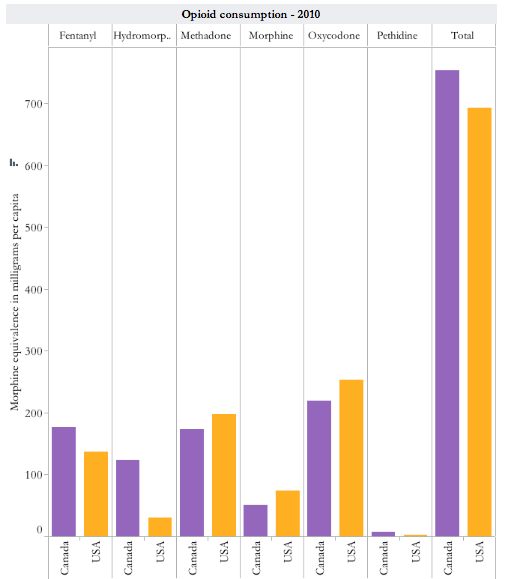 The drug that helped push Canada to No. 1 is hydromorphone – the active ingredient in Dilaudid and Hydromorph Contin. Canada has been the world’s largest consumer of hydromorphone since 2006 – by a wide margin.

(Researcher Martha Maurer notes that if you counted hydrocodone, the active ingredient in Vicodin, unavailable in Canada,  the United States would probably come out on top)

It’s a dubious distinction, when you consider that most powerful painkillers are prescribed for chronic pain – something they were never really meant to treat.

So who’s responsible for fixing it?

Last fall, Health Minister Leona Aglukkaq characterized the approval of generic OxyContin as largely out of her hands.

“I do not believe that politicians should pick and choose which drugs get approved,” she wrote in a letter to provincial health ministers in November, 2012. “What stops future politicians from caving into public pressure and allowing unproven, unsafe drugs on the market once political pressure starts to mount?”

And, consistent with the Harper government’s focus on decentralizing responsibility, she emphasized that this lies in the provinces’ hands because health falls under provincial jurisdiction.

Streets could only become “flooded” with diverted drugs, she said, “if the provinces and territories, and the medical professions they regulate, let it happen.”

View this document on Scribd

Translation? Her spokesman Steve Outhouse said she wants to clarify the meaning of “tamper-resistant” – a characteristic that’s supposed to make drugs harder to abuse but whose efficacy some have called into question.

“The Minister has taken clear action to crack down on prescription drug abuse,” Outhouse said in an e-mail. He noted Ottawa has tightened the rules on its health program covering First Nations and Inuit communities, and now asks pharmaceutical companies to report significant spikes in usage.

The Minister is “open” to other steps, but has no specific plans yet.

“This is an issue that will require all levels of government and medical professionals working together if we are to see results,” Outhouse wrote. ” Our government is playing a leadership role at the federal level, and is willing to work in partnership to tackle this issue that is important to Canadians.”

While Aglukkaq took flak from provincial health ministers and addiction doctors when she didn’t step in to quash an easily abused version of OxContin, she isn’t the only person skeptical of “tamper-resistant” claims.

Andrew Kolodny, chair of psychiatry at Brooklyn’s Maimonides Medical Centre and an expert on opioid addiction, would rather see monitors follow up with doctors giving out high doses, or even something as simple as changing the label on a drug: This wouldn’t limit what what you could prescribe, just what pharmaceutical companies could advertise.

“To turn the epidemic around, you really have to stop creating addicts. And a tamper-resistant pill is just as addictive,” Kolodny said. “It might even worsen the problem, making [doctors] think they don’t have to worry as much about these pills.” 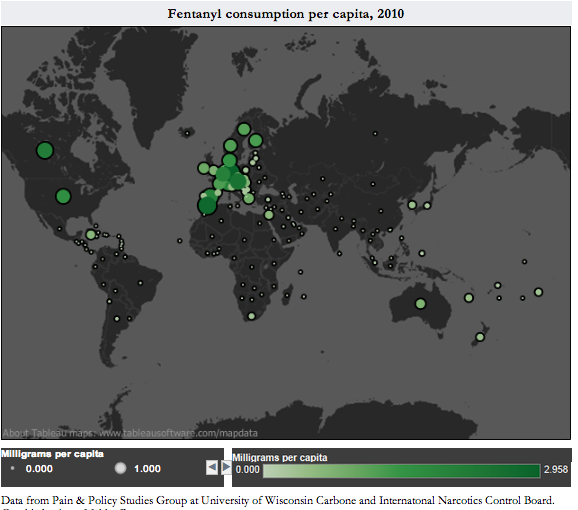 Who pops the most pills? Take a closer look at how Canada’s painkiller habit compares with the rest of the world.

Read: OxyContin’s gone, but Canada’s pill-popping problem is worse than ever

Read: The importance of earnest health-data collection (plus: a brief opioid glossary)