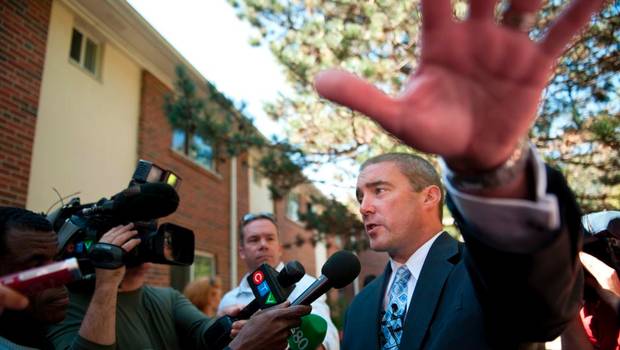 Police trace this year’s fatal shootings back to the same name at the heart of the biggest street-gang prosecution in Ontario history: the Galloway Boys.

Except the notorious east Scarborough gang isn’t supposed to exist – not to this degree and not with such lethality that dozens of people injured in a shooting are afraid or unwilling to come forward. It was dismantled, for all intents and purposes, in a massive police sweep years ago, one named Project Pathfinder after the SUVs the accused gangsters were known to drive.

So when Toronto Police said Tuesday they think the Galloway Boys are behind three homicides and eight shootings in eight months, including an altercation at a Danzig Street party this summer that has been called the worst mass shooting in the city’s history, it touched a nerve.

Police didn’t name any new suspects or lay any additional charges. Tuesday’s pair of news conferences at the scenes of two shootings were exercises in information gathering. Police hope those withholding information will now come forward.

And with wiretaps in place, a key component in the decision by Toronto police to release many details of the investigation, the hope is that some of the players will be unnerved and talk too much, a police source said.

Pine trees are still riddled with bullet holes at the Danzig Street site in the city’s east end where two innocent partygoers – Shyanne Charles, 14, and Joshua Yasay, a 23-year-old barber shop owner and aspiring police officer – were killed and 23 others were wounded when the July party turned violent.

The fight broke out, police say, because youth from Malvern who came to the party were seen as being on the Galloway Boys’ turf. The Malvern boys left and returned with armed reinforcements.

Detective Sergeant Brett Nicol said the new Galloway gang is involved in drug and gun trafficking and prostitution. But multiple sources say there is little indication the dispute at Danzig was over drugs.

There have only been two arrests in connection with the case. Nahom Tsegazab, a 19-year-old who also goes by the name “Gifted,” was wounded in the shooting and later charged with reckless discharge of a firearm. Shaquan Mesquito, an 18-year-old from Malvern also known as “Bam Bam,” was charged with uttering threats. Police said he had a loaded handgun when he was arrested.

Police on Tuesday linked the two fatal shootings at the party with another last December and six shootings that occurred between Sept. 4 last year and Aug. 10 of this year.

Just a few minutes northwest of Danzig Street, on Dec. 30, D’Mitre Barnaby, a 24-year-old with no gang connection, was the victim of what Toronto Police Det. Sgt. Nicol called a case of mistaken identity. He bore a “remarkable” resemblance to the man two black-clad suspects meant to target when he was shot to death.

“We know who did it,” Det. Sgt. Nicol said. “We need people to come forward because we know there are eyewitnesses.”

Witnesses have been hard to come by. Det. Sgt. Nicol said police have plenty of tips, but few from anyone who actually saw the killings take place.

“These shooters are small, weak and cowardly,” he said. “And the fact is, because of their propensity for violence and [willingness] to shoot guns, they’ve got the community holding back. We’re hoping the community is going to come forward after today.”

Some say they fear the opposite may be true – that linking these killings to the Galloway Boys will terrify some and alienate others who feel their communities are being unfairly stigmatized.

“I wouldn’t say [Tuesday’s announcement] came as a surprise. It’s a disappointment,” said Anne Gloger, executive director of the East Scarborough Storefront. “A decade ago, absolutely, there was this huge stigma. There’s been so much work done in 10 years to overcome it. … And then, boom – this happens and it’s almost back to square one.”

The protracted, high-profile trial that saw Tyshan Riley and two associates convicted of the 2004 mistaken-identity murder of Brenton Charlton and handed life sentences in 2009 made the immigrant-heavy and cash-poor Kingston-Galloway area synonymous with Toronto gang crime – unfairly, community organizers say.

The gangsters police identified Tuesday are not Tyshan Riley’s Galloway Boys. This new generation of street youth are disorganized criminals in smaller groups: The “Galloway Boys” of 2012, police say, have a core of maybe four or five people. Leadership jostling and internecine rivalries, police say, are behind this string of shootings. On Aug. 10, Det. Sgt. Nicol said, “one of the up-and-coming leaders” of the Galloway gang was “chased and gunned down against a fence.”

Police say some older gang members have been “mentoring” younger ones. “The majority of our suspects are a new generation,” Det. Sgt. Nicol said, but “how they’re being mentored and their ability to obtain guns goes back to the older generation.”

Andrew Bacchus, a former gang member who now works with youth on the city’s west side, is skeptical of that conclusion. “That seems almost like al-Qaeda. There aren’t kids taking kids down to the Scarborough Bluffs for target practice.”

Some of these self-styled “Galloway Boys” have no connection to their predecessors. People who study or work with street youth say that calling these groups “gangs” may actually give them more legitimacy.

“It basically lends itself to a [suggestion that] it’s more sophisticated than it is,” said Damon (Soul-R) Maraj, who directs a Kingston-Galloway organization called IMPACT n’ Communities.

“A lot of kids will gravitate towards a gang because they don’t fit anywhere else. So these kids find each other.”