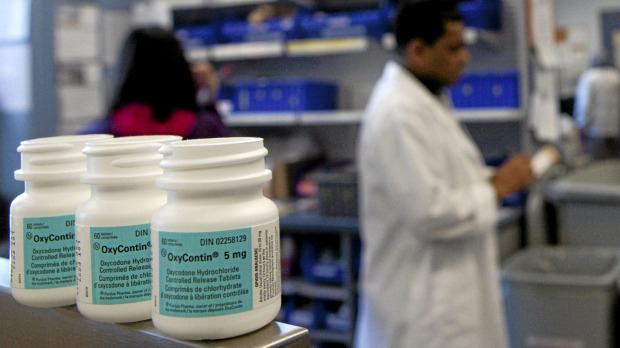 Photo by Michelle Siu for the Globe and Mail

Ontario should overhaul its system for prescribing, monitoring and treating patients using prescription opioids, an inquest into two fatal drug overdoses in Brockville has recommended.

The inquest into the 2008 deaths of 41-year-old Donna Bertrand and 19-year-old Dustin King delivered 48 wide-ranging recommendations Tuesday, including mandatory education and auditing of doctors and better systems for monitoring who can access pills.

Mr. King and Ms. Bertrand were found dead in the same apartment within days of each other. He died Nov. 21, 2008, of an OxyContin overdose, passed out on Ms. Bertrand’s couch, where he lay for hours before people in the downtown Brockville apartment noticed something was wrong.

She died 11 days later after ingesting a fatal mix of sedatives and antidepressants.

The five-person jury’s verdict comes after a five-week hearing and testimony from dozens of witnesses into the two deaths – from the police officers and coroners who first examined the bodies in Ms. Bertrand’s apartment, to the doctors who prescribed her potent opioids, and experts into the drugs’ medical and social effects.

Jurors in the inquest recommended prescribing the drugs in smaller units and registering patients who receive high doses. They also asked Health Canada to review the drugs again and remove approval for some of the highest-potency pills.

For Donna’s sister Joanna Bertrand, the four dozen recommendations are a welcome end to five weeks at the inquest, where she was acting as her family’s legal representation.

Ms. Bertrand said she sees no reason why they shouldn’t be implemented as soon as possible. The recommendations “aren’t out to lunch,” she added. She plans to keep tabs on government agencies to ensure they make progress: She’s all too familiar with the urge to tune this issue out.

“I have a hard time wrapping my head around addiction,” she said. “But Donna … she got caught up in that. And she liked the high and she kept chasing more.”

The inquest heard that Ms. Bertrand’s doctor, Alan Redekopp, increased her daily dose of OxyContin twelvefold over 13 months, despite warnings from police that her reports of stolen medication were questionable.

Jurors recommended obliging doctors to violate patient confidentiality and tell police if they suspect the drugs they prescribe are being misused.

A lawyer representing doctors who had been prescribing drugs to Ms. Bertrand, Dr. Redekopp among them, could not immediately be reached for comment.

Detective-Constable Tom Fournier, the Brockville police’s investigating officer into the two deaths, said he is pleased with the recommendations.

“I think the jury put a lot of time and effort into them … and they certainly addressed our concerns,” he said.

Irfan Dhalla, a doctor at St. Michael’s Hospital in Toronto who testified at the inquest, said the recommendations are “both groundbreaking and sensible,” and went further than he would have suggested.

“If they had been in place in 2008, it is quite possible that the deaths of Dustin King and Donna Bertrand would not have occurred.”

A lawyer for Purdue, the OxyContin manufacturer, which had standing at the inquest, referred questions to a company spokesman who could not immediately be reached for comment Tuesday.