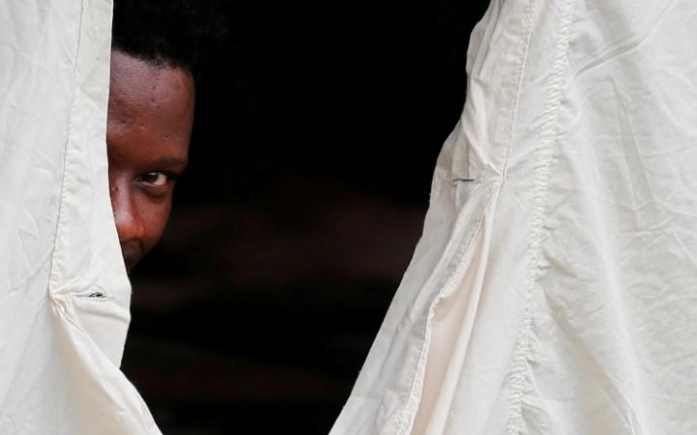 SAINT-BERNARD-DE-LACOLLE, Quebec (Reuters) – Dozens of army tents dotted the Canadian border on Thursday to house hundreds of asylum seekers, many from Haiti, streaming into the country from upstate New York to file refugee claims.

More than 200 people a day are illegally walking across the border into Quebec to seek asylum, government officials said. Over 4,300 asylum seekers have crossed illegally into Canada in the first half of this year, with some citing U.S. President Donald Trump’s tougher stance on immigration.

Canada’s military has set up heated tents to house up to 500 asylum seekers as they undergo security screenings near the border. Officers from the Canada Border Services Agency and the Royal Canadian Mounted Police have also been redeployed to the area to provide additional assistance as authorities grapple with the influx.

The claimants, once they have crossed the border illegally, are brought by buses to the makeshift camp where their belongings are kept in shipping containers.

About 25 asylum seekers, predominantly men, occupied some of the tents on the temporary encampment on Thursday afternoon. They lay on cots, charged their phones and sat at wooden picnic benches in a light drizzle.

Most of the recent arrivals have been Haitians, officials say, who fear they will be deported from the U.S. as their “temporary protected status,” which granted more than 50,000 Haitians residency in the U.S. after the 2010 earthquake, is set to expire in January. Spurred by false accounts of guaranteed residency in Canada, they made for the border.

Wilfrid Guillaume, 36, left Haiti three months ago and applied for asylum in the United States. Guillaume, who occupied one of the tents, said he abandoned his claim because he felt his chances were poor. He walked to Canada, he said, “where we’ll be welcomed.”

Once processed, asylum seekers are put on buses to Montreal, the largest city in Canada’s mainly French-speaking Quebec province, which has opened its Olympic Stadium, a former hospital, a school, and other places to house people.

Asylum seekers are crossing the border illegally because if they present themselves at formal border crossings, they will be turned back under the Canada-U.S. Safe Third Country Agreement.

The Canadian government has said it will not suspend the pact, which critics say is responsible for the chaos at the border.

All illegal crossers are held for questioning by the RCMP and CBSA, and the military tents at Lacolle are set up for them to live in during these two rounds of questioning.

Once they leave the makeshift tent city, asylum seekers face a long wait and an uncertain future. Delays for the refugee hearings are the longest they have been in years.

Meanwhile, refugees who have spent time in the U.S. before filing claims in Canada will find themselves at a disadvantage in making their case, according to a Reuters review of Canadian federal court rulings on asylum seekers and interviews with refugee lawyers.