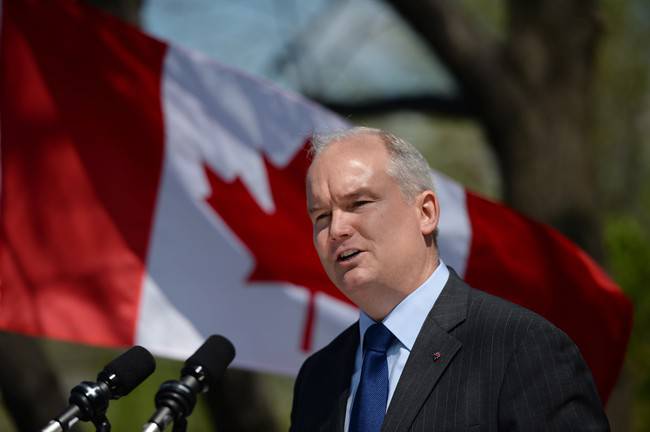 Erin O’Toole talks to a lot of veterans and he says they’re near-unanimous.

“Ninety-nine per cent of what I hear is positive,” the Veterans Affairs Minister and Conservative candidate says.

O’Toole says the Anyone But Conservative veterans’ movement is more a political ploy than anything else. He chalks it up to “the intervention of union money in politics.”

“There are some veterans that have had bad experiences, no question. There are people that are frustrated, no question,” he said.

“This has been a campaign that in many ways, I think, can tap some frustrations people have, but is orchestrated almost entirely by people that are active in the election.”

Members of that campaign feel differently.

Walter Callaghan, who’s still fighting for benefits a decade after seeking help for his mental illness and five years after being medically discharged, says the group’s members include people who would normally be true-blue Tories.

“I go after the Harper government because of the rhetoric they’ve been using, and because they’ve had nine and a half years to fix problems that were identified,” he said.

“The claim … is a red herring or straw-man attack that is designed to speak to the Conservative base in an attempt to undermine our message of discontent and dissent,” he wrote.

The Public Service Alliance of Canada did help cover travel costs for veterans who wanted to attend a meeting last year with then-Minister Julian Fantino, he said. And they get donations.

“Because ABC is a registered third-party campaign, they are able to receive donations. … Further, unions are part of the fabric of the Canadian way of life and they have been beneficial to the lower tiers of the socioeconomic strata for generations. So is it really such a ‘bad’ thing if the unions were to turn around and provide support.”

READ MORE: Canada’s vets have Conservatives in their sights

This is O’Toole’s first federal campaign — he was elected Durham MP in a 2012 byelection. And while he’s running for re-election in a longtime Tory riding, he’s also handling a particularly tricky file.

O’Toole took over Veterans Affairs from Julian Fantino, Conservative candidate in Vaughan, as the feds were under fire from a group normally considered their allies: Veterans and members of the Canadian Forces.

Many of Canada’s youngest veterans have said they’ve been denied treatment, been given the runaround in their efforts to get benefits or become lost in the labyrinthine bureaucracy of the Department of National Defence and Veterans Affairs.

A Global News investigation last year shed light on the invisible psychic wounds Canada’s veterans are struggling with even as a spate of soldier suicides put renewed scrutiny on psychiatric resources available (and those so often out of reach).

A Global News report in November revealed that Cpl. Nathan Cirillo’s family would not have qualified for equal death benefits after he was shot to death at Ottawa’s War Memorial because he was a reservist, depriving his survivors of millions of dollars over the course of the death benefit. But Ottawa made a special exception for Cirillo.

Within 24 hours of the Global News report, the federal government vowed to fix that death benefit inequity for all reservists. But five months later, Veterans Affairs said it was still working on addressing this and the unequal disability benefits reservists get.

Since then, Ottawa has changed benefits rules for reservists and their families and hired more case managers to help former soldiers.

Those problems are a thing of the past, O’Toole says.

“When I was in the military [in the 1990s] … there was virtually zero support for mental health injuries,” he says.

“The military was just coming to grips with the fact that mental injuries should be avoided, treated, triaged.”

“We’ve made remarkable progress. It’s been a priority for our government.”

In addition to opening new operational stress injury clinics, O’Toole said, the Conservatives are “greenlighting a series of other types of treatments” such as service dogs and equine therapy.

And O’Toole argues that part of the increase in vets coming forward for help with mental illness is thanks to a reduction in the stigma surrounding diseases of the brain.

“This is causing us an additional challenge. … The challenge we face is also a good recognition of the fact that people are comfortable coming forward and getting help.”

O’Toole also takes issue with criticisms of the more than a billion dollars in under-spending within his department even as veterans struggle to get benefits.

That’s largely thanks to statutory benefits lapsing, usually because beneficiaries have died.

But there are also funds going unspent because eligible veterans aren’t accessing them.

“We had veterans leaving the military but not taking advantage of budgeted spend,” he says.

So Veterans Affairs has tried to educate people, in part by purchasing TV ads. But O’Toole acknowledges part of the problem is the lack of coordination between the Department of National Defence and Veterans Affairs, both of which are supposed to take care of troops’ needs at different points in their lives and careers. But frequently there’s no one to navigate the gap.

“That has been one of the biggest challenges,” O’Toole says. “We’ve been trying to bridge this. … It’s something that I think probably should have been addressed 30, 40 years ago.”

Global News has spoken with many people who’ve been forced to choose between their career and their health, and who found themselves pushed out of the military when they sought help for mental illness. But O’Toole is adamant: That isn’t happening any more.

“Putting up your hand for support is not a direct exit to the door,” he said. “It bothers me when people suggest that.”

And while O’Toole admits the feds have a ways to go, he insists they’re making progress.

“To have it portrayed as ‘Nothing’s being done’ or ‘There’s hopelessness out there’ is not accurate.”