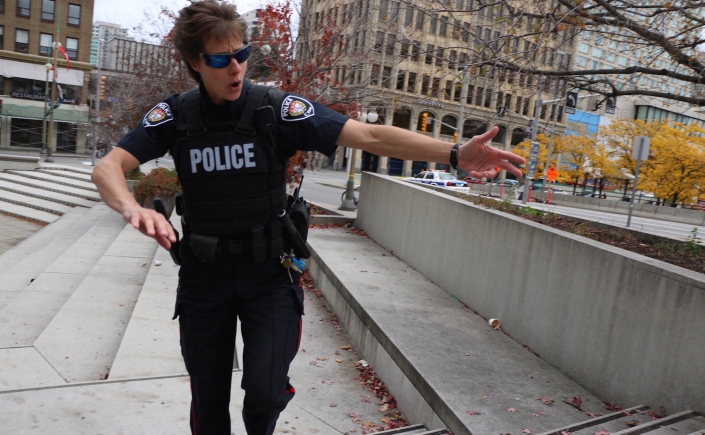 Prime Minister Stephen Harper unveiled his government’s new counter-terror bill with dire warnings about the threats facing Canada from radical, freedom-hating groups on the other side of the world.

“A great evil has been descending on our world,” he said in Richmond Hill on Friday.

And Harper introduced Bill C-51, a sweeping piece of legislation that covers everything from what you’re allowed to say and write to who can board a plane, what happens to your tax information and how long you can be detained without charge, he cited fatal attacks last fall in Ottawa and St. Jean Sur Richelieu.

But Harper isn’t sure how the new counter-terror measures could have prevented the shooting rampage that left one young father dead and bullet holes in the halls of Parliament: Michael Zehaf-Bibeau had a history of petty theft and substance abuse but wasn’t on police radar as a potential terrorist.

Highlights of the bill include:

While he noted she needs to study the bill further, Privacy Commissioner Daniel Therrien said he’s “concerned” by the new powers it gives law enforcement.

“This Act would seemingly allow departments and agencies to share the personal information of all individuals, including ordinary Canadians who may not be suspected of terrorist activities, for the purpose of detecting and identifying new security threats.

“It is not clear that this would be a proportional measure that respects the privacy rights of Canadians,” he said in a statement Friday afternoon.

“I am also concerned that the proposed changes to information sharing authorities are not accompanied by measures to fill gaps in the national security oversight regime. …

“Gaps in the oversight regime were identified long ago, notably by Justice O’Connor in the report he made at the conclusion of the Arar Inquiry. Extending the jurisdiction of oversight bodies would be an important step towards the greater transparency that Canadians expect.

“It wasn’t as bad as I thought it was going to be,” said Ann Cavoukian, Ontario’s former privacy commissioner and now director of Ryerson University’s Privacy and Big Data Institute.

Cavoukian likes the need for judicial approval, but is still worried there isn’t robust enough oversight to match the new powers.

“Where it requires [internet service providers] to take down websites, that could curtail political speech, dissenting views. … Without some serious guidance on this, it could really chip away at freedom of speech.” 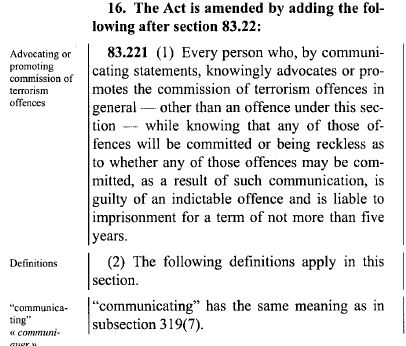 Conceivably, if you’ve ever written a blog post railing against Canada’s actions in Iraq or Afghanistan; brought a Tamil Tigers flag to a protest; argued that Canada should restore humanitarian aid to Gazans through their Hamas government; called Israel an apartheid state; supported militant independence movements in Turkish Kurdistan or Spain’s Basque region; you may have done just that.

And while it’ll likely be up to a judge to determine intent, Cavoukian said she worries about the impact the law will have on political satire.

And University of Ottawa law professor Craig Forcese noted Thursday that even speech most Canadians would find odious or offensive (“Hooray, terrorists!” was the example he gave) is still covered under Canada’s current free speech law – and rightly so.

“If you want to follow that precedent and start throwing people into the clink because they’re waving the wrong flag at a protest … you’re going to have a huge free speech case. It’s going to be an enormous constitutional challenge.”

Sukanya Pillay, Executive Director and General Counsel for the Canadian Civil Liberties Association, said the group would consider launching a Charter challenge but needs to look at the bill much more closely.

“We have no evidence of why the pre-existing laws weren’t effective enough. Broadening these powers without sufficient constitutional safeguards being complied with can lead to real civil liberties violations,” she said.

“If it was clear, after doing a careful and thorough analysis, that there were serious Charter concerns, then we could consider all of our next steps.”

What’s causing privacy advocates concern is a section of the new law that would let government institutions give your personal information to security agencies if they think it would be “relevant” to safeguarding Canada’s security. 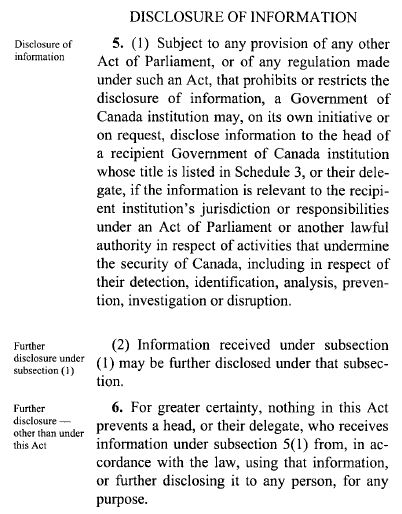 “Canadians give a massive amount of information to a whole range of government agencies. You need to do that to live, pretty much,” said David Christopher, with Openmedia.ca.

“So it’s really worrying to see the broad extent to which that information, which is often really private … can be accessed by CSIS.”

Asked by a reporter whether his bill would compromise Canadians’ freedoms, Harper dismissed the suggestion.

“The premise of the question itself is wrong,” he said. “Every time we talk about security, [the opposition parties] suggest that somehow our freedoms are threatened.”

Canadians, he added, understand that “their freedom and their security more often than not go hand in hand.”