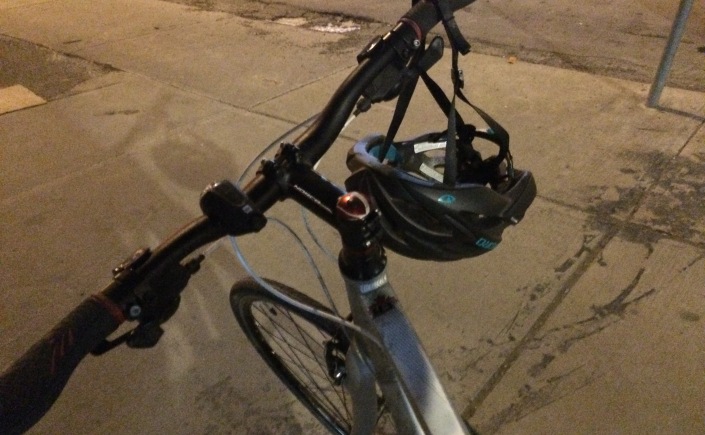 I heard the crunch as much as felt it – the weight of a thousand kilograms of car ramming into me from behind.

Several passersby heard the collision, and rushed toward it to see what they could do to help. One driver who saw the aftermath of the crash pulled over and called 911.

The only person who didn’t seem to hear, or see, or feel the car smash into a cyclist was the person behind the wheel – or, if he or she heard, saw, felt that sickening crash, didn’t think it necessary to stop.

The driver didn’t even slow down.

I was thrown like a Looney Tunes character, flying backward and landing with tweety birds circling my head. “Duh, did anyone get the licence plate of that truck?”

No one had. No one saw the driver. Even surveillance video accessed later by police missed the licence plate. The friendly Toronto Police officer who took my initial statement from the ambulance came to follow up in hospital. Interviews with witnesses and reviews of surveillance video revealed the driver had been checking his or her blind spot and accelerating to change lanes when the car smacked into me and kept on going, the officer said.

They knew it was a black Chevrolet Cobalt. But that was it. And that isn’t nearly enough. The officer told me not to get my hopes up of ever identifying the driver.

I was the victim of a hit and run, and there probably won’t be any repercussions for the person who hit me and ran.

“Essentially we’ve got a jigsaw puzzle we’re putting together. And if we don’t have enough pieces of it then it is challenging,” Toronto Police Constable Clint Stibbesaid in an interview.

“Even if we’ve just got a partial on the plate, we can actually check that against Ministry records and find out how many cars fit that profile. And from there we start weeding it down. … Unfortunately, when you don’t get the bare necessities, it’s extremely difficult for us to be successful in an investigation.”

Sometimes investigators have more to go on: There’s enough debris on the scene for them to identify the car; or someone notices the vehicle damage later and phones it in.

Failing that, you’re likely out of luck.

It’s tough to get exact numbers on the percentage of hit-and-run drivers who get caught, Stibbe said: Not every file opened as a “fail to remain” results in a fail to remain charge, anyway – even if the suspect is found.

“Obviously it does occur” that people hit someone with their car, drive away and are never caught, he said. “Can I give you a number? Unfortunately, not.”

So any thirst for closure – or at least someone to cover my ruinous bike repair bill – appears doomed to remain unquenched.

But what’s bugging me more is how this happens: How does someone hit a human being with their car, and drive away?

“I think each individual makes a decision at the time it occurs. And even that, I can’t even say that, because what’s to say the person knew he had done it?” Stibbe notes.

“Some cars now are extremely quiet inside. … You could have a gunshot go off, and you don’t hear anything inside those cars. That’s troubling, because you don’t hear what’s happening outside the vehicle. We’ve been behind vehicles with the lights and sirens going and the individual cannot hear it,” Stibbe said.

“If he clipped you, and let’s say he wasn’t looking, which is entirely possible, maybe he didn’t hear it. Maybe he didn’t even feel it.

“When you think about a several thousand pound vehicle versus a person on a bike weighing maybe 150 pounds, bike and everything, is the individual negligent? Yeah, he should have paid more attention to what’s around [him].

“Did he do it knowingly? … Unfortunately, we’ve had many collisions where an individual has not realized they’ve run over an individual.”

This still seems incredible to me. But as technology builds vehicles that are soundproof aerodynamic cocoons, Stibbe said, drivers are increasingly isolated from what’s going on around them. And all the fancy add-ons meant to prevent accidents just make drivers more careless, he said.

“The pedestrian warning systems, collision avoidance systems. What all these do is make us worse drivers.”

For the record, I was fine: A bump on the head (no, I wasn’t wearing a helmet; yes, I will wear seven of them from now on) and a hurt left leg. Under the circumstances, I was very lucky.

But the experience also made me gun-shy. Traffic feels like one big trust exercise, and even as a pedestrian I find myself glaring fearfully at cars in intersections: You gonna stop your death machine for me, dude?

“Nobody realizes how much danger they put anybody in when they operate a motor vehicle, especially if they’re careless while operating that motor vehicle,” Stibbe said. “Because they never look at the consequences of what they do – it’s only after something’s occurred.”

Either way, I hope my cowardice dissipates by the time I get back on the bike.

Oh, and if you were driving a black Chevrolet Cobalt eastbound on Bloor just west of Sherbourne around 8:3o a.m. on Friday, and you think you maybe kinda felt a bump…give me a shout? Thanks.