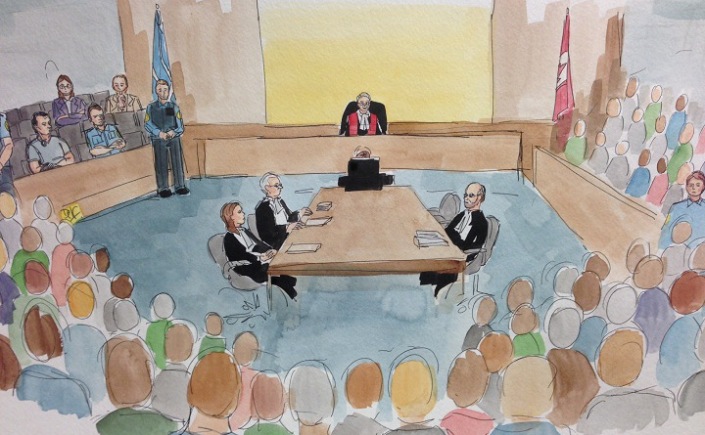 Luka Magnotta has said he killed and dismembered Chinese student Jun Lin, but is seeking a designation of NCR – not criminally responsible.

If Magnotta is found not criminally responsible it would mean a mental disorder was behind his actions. Instead of going to prison, he would go to a forensic hospital where he’s kept and treated for however long it takes until the illness is abated and he’s no longer a danger to the public (or himself).

A miniscule proportion of Canadian offenders is designated not criminally responsible, and they’re far less likely to reoffend than their counterparts in prison. But in the wake of such gruesome and high-profile NCR designations as Vince Li and Richard Kachkar, the defence has resulted in no small degree of public consternation.

READ MORE: What is ‘not criminally responsible’?

Sandy Simpson is chief of forensic psychiatry at the Centre for Addiction and Mental Health in Toronto. He emphasized he can’t address the Magnotta case itself, but spoke with Global News about what an NCR designation means – and doesn’t mean.

A lot of people seem to think, especially when it comes up in a case like the Luka Magnotta case, that someone [deemed NCR] would effectively be getting away with murder. How would you respond to that?

Well, no. What the NCR verdict recognizes is that there’s a very small number of mentally ill offenders for whom the illness caused the offence. And it makes no rational criminal justice or moral sense to punish an illness.

And that’s why the diversion from the punitive aspect of the criminal justice system. … NCR people are not criminally responsible for what they did, but they are responsible for their wellness and the safety of others going forward. So your progress occurs at whatever speed it takes for you to master the changes in your life, the understanding of your illness and the treatments that are necessary to achieve that. So instead of a punishment moral imperative, it becomes a public safety and accountability moral imperative on NCR perpetrators.

How do you respond to people who look at, for example, the day passes given recently to Richard Kachkar, I think only three or four years after the offence, and that worries them, that causes them concern?

I guess that can be very hard for the public to understand because there isn’t a process of punishment going on. And of course for someone who was not suffering a mental illness to have community access at that point would be extraordinary. So one can understand why the public gets perplexed by that.

But of course if the thing that drives your risk to others is your illness, and your illness is treatment-responsive, as most are, and you’re not an antisocial person, basically, you’re just a person who’s had an illness and has now recovered from it, the risk you pose to others can rapidly improve with treatments, such that community reintegration, at least in small and sensitive ways, becomes feasible and important in one’s recovery.

Because … the aim of forensic or NCR rehabilitation and recovery has to be that people show that they can not only get well within hospital but can do the things in the community that are necessary to get well once they’re discharged. And the only way to test that is by slow, gradual and thoughtful community reintegration. So we have to do that to be able to test how the person is doing, to be able to demonstrate whether people are ready for more liberty or whether they need to take longer in secure care.

So the questions one asks about the appropriateness of that are a little different to those you would ask had someone been convicted of the offence. And that can be understandably perplexing for the public.

IN DEPTH: Not Criminally Responsible

Why is the recidivism rate for people designated NCR so much lower [than for those leaving the prison system – 8 per cent or 9 per cent, compared to 30 per cent to 40 per cent]?

And people take the process of reintegration slowly and progressively and thoughtfully. And people get access to a lot more therapeutic engagement … within the forensic system than they are able to do in the correctional system.

READ MORE: Death behind bars – what happens to people with mental illness in Canada’s prisons

Does [an NCR designation in a particularly gruesome case] make the stigma surrounding mental illness worse?

Cases like Li and Kachkar are dreadful tragedies. Both cases involve very good people dying who should not, and very ill people doing things they would not were it not for their illness. And there is nothing but tragedy in those situations. And the public is understandably very shaken, as I think we all are,  about these events occurring.

Does it increase stigma? Well, it depends on how we report it. Clearly these are high-profile things that will be reported. I think what we in the mental health sector understand, and it’s important that we are clear with the public, that there’s a rare but known complication of some forms of mental illness and violent behaviour. It is rare, but it is there. And we need systems of care within the mental health system … to do all we can to prevent them from arising in the first place and to carefully care for those people following those events.

I think the important thing the public needs to understand is there is a very good, careful and thoughtful forensic mental health and and review board system in place to oversee the secure care and rehabilitation of those people.

Generally speaking, could earlier access to treatment prevent some NCR cases from occurring?

We do know that early and good access to mental health services and ensuring good treatment and follow up is associated with better outcomes, both in terms of criminal victimization for people with mental illness and perpetration. So the better we help people stay engaged with care, the earlier they get on to effective care, the better the outcomes. …

And this is where stigma becomes really relevant: If people don’t want to go near mental health systems because they fear the stigma of being seen with a mental illness or the bad effects that might come up if they own up to the fact they’re in trouble and need help, then those things increase risk to the person and increase public safety risks, as well.

So it’s kind of perverse: If we get very fearful and very restrictive on people with mental illness and drive them underground, we make things worse. So this is where stigma-reduction and encouraging people to engage with treatment early is really important.

Are we actually getting better, in terms of stigma? Or do we have awareness campaigns but maintain these really entrenched fearful or judgmental attitudes?

I suspect the answer is yes to both. There are a lot of really good public campaigns and destigmatization campaigns going on and I think that’s incredibly valuable. Very, very important. … I think it does help the public  understand that these are illnesses and that the most important thing for public safety is good care, good treatment and inclusive social responses. Which is not the same as pretending that risk doesn’t exist … but the better we include people, the better we support people.

The better we provide care and social inclusion for people, the lower the risks are for everybody.

This interview has been edited and condensed for clarity.