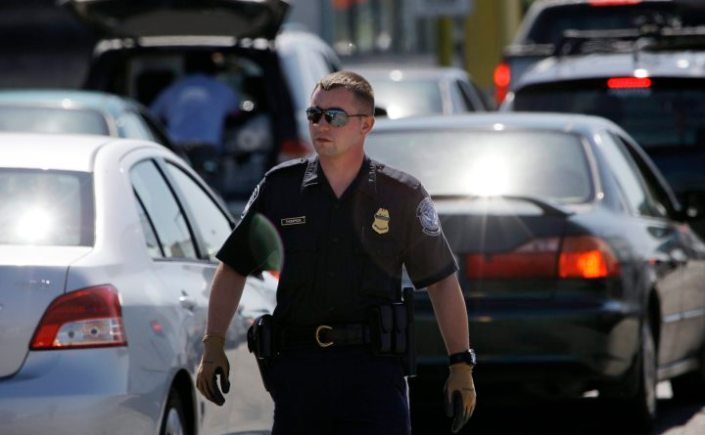 That’s how many pills an Ontario pharmacy employee was able to steal before being caught in February – by far the biggest oxycodone theft reported from a Canadian hospital or pharmacy since January 2012, according to numbers Health Canada gave Global News.

No Ontario pharmacist has had his or her licence revoked as a result of prescription opioid thefts, although there have been disciplinary cases and suspensions, the College told Global News.

Generic oxycodone isn’t the only abused opioid out there; in Canada, it isn’t anywhere near the most common, thanks in large part to most provinces’ refusal to cover it under their basic drug plans.

(Although, as we’ve noted elsewhere, other, easily abused, highly addictive and less regulated drugs have swiftly stepped in to take its place.)

But in the prescription drug-smuggling market, it’s Canada’s competitive advantage: These no-name versions of controlled-release OxyContin aren’t legally available in the U.S. – certainly not in these pill sizes, which range from 5 to 80 milligrams per pill.

So when they show up in Florida, Colorado, Utah, California or Illinois, it’s after being smuggled south across the border.

It’s far easier, and far more lucrative, to cross the border with a suitcase full of pills than one stuffed with a kilo of heroin or cocaine.

“You’re looking at $300,000 worth of pills crossing the border very easily,” said John Burke, President of the National Association of Drug Diversion Investigators and Commander of the Warren County Drug Task Force in Lebanon, OH.

As of last week, U.S. border patrol authorities were on track to seize significantly more OxyContin (they don’t differentiate between generic and brand-name drugs) than in either 2013 or 2012 – about 8.4kg by early July compared to about 13kg for the entire year of 2013/)

“The reasons are obvious,” said Richard Dart, head of the Rocky Mountain Poison and Drug Centre and head of the Researched Abuse, Diversion and Addiction-related Surveillance System. “You have a lot of drug in a small package, high quality and you can crush it. And so it’s perfect.”

“… In the U.S. right now, I think we are seeing a contraction of the prescription drug supply,” he added.

“There’s less prescription drug supply out there, so, yeah, that would create a need for drugs from Canada.”

Dart and his colleague Dr. Nabarun Dasgupta  track drugs’ street prices from city to city through a website that encourages people to anonymously enter the amount they spent, and where, to see if they got a good deal; he tracks prescription figures against other numbers on abuse to get a sense of the impact these drugs are having and where they’re coming from.

“One of the challenges for Canada is they don’t have a good monitoring system.”

That’s putting it mildly: There is no national tracking system for prescriptions, abuse, addiction treatment or deaths related to prescription opioid abuse, and Health Canada tells Global News there are no plans to put one in place, even though Dart says he’s met with government officials and raised the issue. The U.S., conversely, has six national programs tracking this.

It worries him to hear that Hydromorph Contin prescriptions are up in Ontario – hydromorphone, the drug’s active ingredient, is in high demand in the U.S.

“It’s called the ‘Champagne of opioids,’” he said. “U.S. physicians, we’re very concerned about hydromorphone, so we don’t prescribe it as much.”

But in Ontario, Hydromorph Contin prescriptions doubled in a 15-month period. Andthe province has no plans to clamp down on prescribing.

(When asked, Ontario Health Minister Eric Hoskins said he wasn’t aware of any drugs being smuggled from Canada into the United States. An emailed statement from federal Health Minister Rona Ambrose‘s office said “The RCMP and CBSA work closely together and with other local law enforcement agencies to ensure the integrity of the Canada-US border.” )

If hydromorphone became widely available, Burke said, “I think it would become the addict’s drug of choice. … I see that as a potential problem.”