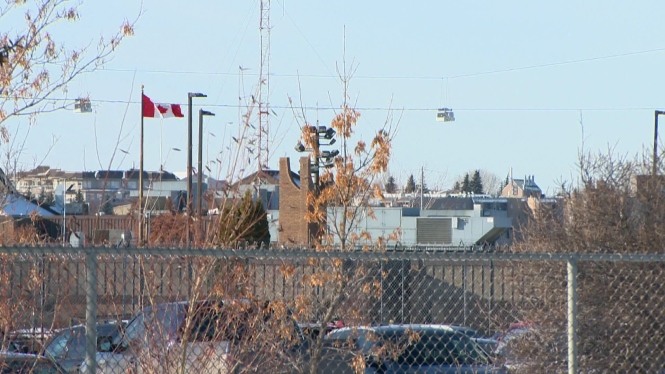 This is the closest we got to Saskatoon’s Regional Psychiatric Centre.

Journos grow thick skins thanks to frequent rejection (and no, not just the social kind). But in the interest of transparency we wanted to elucidate the public bodies we’ve tried to access for this story, only to be refused.

We first contacted Public Safety Minister Steven Blaney for this story the afternoon of Monday, Jan. 13. The first response came within minutes: “Will get back to you.”

The next missive, which came that Friday, was less encouraging: “Following-up on this. I’ll let you know if / when an interview with the Minister is possible.”

On Wednesday, Jan. 29 a follow-up phone call on our end got us a briefing note outlining how much lower prison population growth was than worst-case projections – but no interview. On March 11, “in the interest of time and to ensure [I had] all the facts,” I was encouraged to send questions to Corrections Canada.

“As for the interview with the Minister,”  I was told at the time, “I will get in touch with you – should the interview be possible.”

Then radio silence until March 21 – two months after our initial interview request.

“I understand that CSC has addressed all your questions related to their operations. It is not a practise for the Minister of Public Safety to comment on CSC operations. Therefore the interview is not possible.”

(Blaney did take questions following a press conference on this issue Thursday, May 1 when he unveiled a new action plan on inmates with mental illness. Asked why the numbers of deaths and assaults are disproportionately high in psychiatric prisons, he said

“This is the very reason of this announcement today. We are very well aware that inmates with mental health issues are more vulnerable to incidents in our facilities. That’s why Correctional Services of Canada has initiated a particular strategy. But we are moving forward with our five[-pillar] action plan, and this is why our announcement today is very important and critical, because the environment in which those inmates will be will be more, if I can call it, a medical facility, although still within the virtual border of a penitentiary, but still much more adapted to the needs of those individuals, therefore reducing the risk of a tragic incident.”)

Around the same time, Corrections Canada rejected our request to tour Saskatoon’s Regional Psychiatric Centre – “the interview and tour cannot be accommodated for operational reasons – it cannot be conducted with minimal disruption to the functioning of the operational unit” or interview its executive director Shawn Bird.

Same response for Abbotsford, B.C.’s Regional Treatment Centre, where a tour was nixed and whose executive director declined an interview.

And Ontario turned down our request to tour Brockville’s St. Lawrence Valley Correctional and Treatment Centre‘s Secure Treatment Unit – the one lauded by senators and psychiatrists alike – because “recording devices of any kind are not permitted inside a correctional facility or treatment centre.”

On Thursday Blaney unveiled a “Mental Health Action Plan to treat complex mental illnesses among federal offenders.” It sounds exciting. We wish he’d talked to us about it earlier.