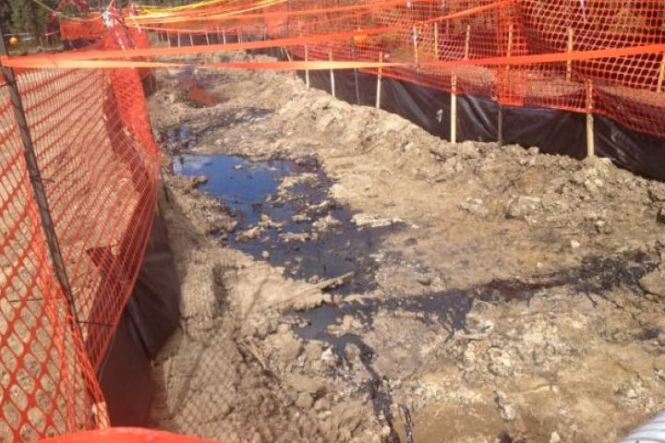 The company whose northern Alberta spills have been oozing bitumen for 10 months nonstop has asked the province to let it start high-pressure steam operations less than a kilometre away from one of the spill areas.

More than a million litres of bitumen have spilled so far from Canadian Natural Resources, Ltd.’s Primrose sites – but it’s hard to tell because that’s lower than what the company said had spilled several months ago. (CNRL says that’s due to “reconciliation” in its numbers; the Alberta Energy Regulator doesn’t collect its own figures)

Either way, that makes this one of Alberta’s top five bitumen spills in 40 years (one other of which was also on CNRL’s Primrose site). And the leaks show no sign of stopping.

Canadian Natural applied last month for permission to start high-pressure steam operations at a Primrose South site. The closest well is about 500 metres away from the one-kilometre exclusion zone the province set up last summer around one of the spill sites.

This would be the same kind of high-pressure cyclical steam stimulation CNRL used where these spills occurred: Inject extremely high-pressure steam into a vertical hole in rock; then suck all the heated bitumen out as the high pressure forces it up through the same hole in the rock.

CNRL says it knows what started the leaks in the first place: It blames old wellbores deep within the rock that should have been capped with cement but allowed bitumen to escape.

“We are confident as to the cause and the step we can take to prevent it happening again,” spokesperson Zoe Addington said in an email.

Others aren’t so sure.

“It’s kind of strange to me they’re sort of approving steaming in the absence of knowing officially what went wrong,” said Keith Stewart, climate and energy campaign coordinator with Greenpeace Canada.

“If they start injecting here it could reheat and cause the other one to keep spilling or it could, depending what’s cracked, it could widen cracks more. It certainly won’t make things better.”

Regulator spokesperson Bob Curran said they’re reviewing the application and there’s no set timeline for how long that will take. “As a general policy,” he said in an email, “we do not discuss specifics of applications that are under review.”

When the spills were just a few months old, CNRL said there was no way to stop the seeping bitumen until the pressure pushing it up from underground subsided. It appears it still hasn’t, although it remains unclear how much has actually spilled: In September, CNRL said about 1.2 million litres of bitumen had spilled; this week, it said about 1.77 million, chalking the discrepancy up to reconciled numbers.

The company also said the amount spilling now is almost “imperceptible” – about 1,000 litres a month from all spill sites.

Kevin Timoney doesn’t buy it: The Treeline Ecological Research investigator published a detailed report into these spills, figuring that, if previous volume reports were accurate, the real amount of bitumen spilled so far is probably closer to 2 million litres.

“Both AER and CRNL fail to provide accurate, complete, and timely information to the public,” Timoney’s report reads. “Without independent oversight of reported hydrocarbon release and recovery volumes, the public may never know the true volumes spilled or recovered.”

The spills are expected to come up in CNRL’s conference call with investors following its fourth-quarter earnings announcement Thursday.

CNRL’s application to start high-pressure steaming says it has done a risk assessment on all wellbores within a kilometre of the proposed site, and plans to implement “an enhanced monitoring and reporting protocol” within that area.

Others aren’t so sure wellbores are the answer: The Alberta Energy Regulator would say only that it “continues to make progress is its investigation, and will release its findings once the investigation is complete.”

Environmentalists point out it seems statistically unusual for several wellbores in different locations to suddenly fail at once, and strange for one failed wellbore to cause spills surfacing several kilometers apart.

They say it could be that the steam’s just too high pressure – it’s cracking the caprock, creating fissures in the stone where bitumen can escape.

If that’s the case, it could mean trouble – not just for CNRL’s operations at Primrose, but for anyone extracting bitumen by injecting high-pressure steam into the ground. And the number of in situ operations doing that is slated to grow. What happens if it turns out companies don’t know as much about doing that safely as they thought they did?

The regulator’s investigation into a similar CNRL spill in 2009 suggested problems with rock and pressure, but was ultimately inconclusive as to what caused the large spill.

It’s possible the broader implications of such a finding could be holding the regulator back from suggesting the problem lies in the extraction method itself.

“It would be a very brave bureaucrat in Alberta who said, ‘We have a problem with in situ technology’ because it is the future of tar sands development,” Stewart said. “This is why I think they need to make their reviews public and they need to be reviewed by independent experts.”

With a report from Leslie Young