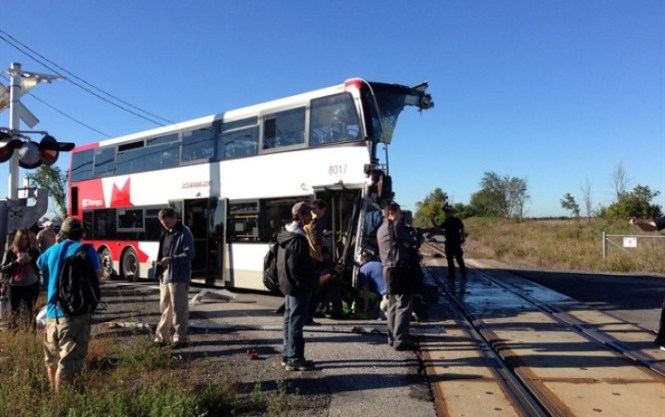 The level train crossing where a fatal collision sheared the front off a bus, killed six people and injured 34 others was flagged as a safety hazard more than a decade ago. In the years since, a plan to separate vehicle traffic was scrapped, even as the roadway got much, much busier.

Barrhaven’s population skyrocketed 25 per cent between 2006 and 2011, making the suburban neighbourhood the fastest-growing part of Ottawa. But the rail crossing, which sees more than two dozen trains zip by daily, remained at grade.

It isn’t clear what caused a double-decker OC Transpo bus to careen into a Via Rail train Wednesday morning as panicked passengers screamed for it to stop. It probably won’t be clear for a while: It could be more than a year before the findings of a Transportation Safety Board study into the crash’s cause are made public.

And even then, the board’s recommendations aren’t binding. Its investigators expressed frustration just a few months ago when suggestions on how to make trains safer were rebuffed.

But crossings along this busy Ontario-Quebec corridor have raised red flags with both the safety board and local officials for years. The Transportation Safety Board has put level crossings on its watchlist, and has said the federal government “must” change the rules on when an underpass or overpass is required.

At the time, there were plans to change that: $40-million from all levels of government was set aside to build an underpass.

That was not to be: The project ran into subterranean soil challenges that would have vastly inflated the cost if the city had stuck with the original plan.

So the city changed course. The crossing stayed at grade level; gates and lights were added as safety precautions.

Chiarelli, now a Liberal MPP, backed off his previous criticisms Wednesday, noting that there’s been “a tremendous amount of new infrastructure built” in the area, including dedicated bus lanes.

“I cannot comment on what the cause of this accident might be,” he told reporters following Question Period. “There certainly were concerns then about safety. My understanding is that a lot of improvements were made.”

There were 810 collisions at rail crossings across Canada between January, 2008 and March, 2012. They left 101 people dead. But none in recent years killed as many as Wednesday’s Ottawa crash.

Transportation safety officials assess a crossing’s sight lines, train speed and traffic counts to determine what kind of setup would be safest, said TSB senior investigator Tom Griffith. The heavier the vehicle traffic, the trickier the sight lines or faster the trains, the more likely an overpass or underpass will be the safest option.

But a lot can change that initial assessment.

Griffith wouldn’t comment on whether the Fallowfield crossing might be an instance of local traffic outgrowing its rail crossing infrastructure. He noted this crossing had gates and lights, both of which appear to have been functional at the time.

But the TSB itself has noted that gates, bells and flashing lights aren’t always enough: “Despite these warning devices, collisions between vehicles and passenger trains continue to occur,” the board warns in a factsheet.

But the TSB can only recommend – it can’t coerce. Whether the federal agency will or not remains unclear.

Transportation Minister Lisa Raitt issued a statement expressing her condolences following the crash, but her office did not respond to queries as to whether Ottawa plans to act on outstanding TSB recommendations.

The Transportation Safety Board said earlier this year that the federal government rejected recommendations in the wake of a fatal derailment in Burlington last year.

Following two of Canada’s deadliest train accidents, Griffith said, that may change. A fiery derailment that killed 47 people and devastated Lac-Megantic earlier this year put a spotlight on rail safety.

“I think, [after] the Quebec incident, yes – they’re more willing now to accept our recommendations.”

Update: In an emailed statement just before 10 p.m. ET Wednesday evening, Transport Canada said it has appointed a “Minister’s Observer” to keep track of this investigation, and noted it has invested in rail crossing safety “by helping municipalities add extra lights, replace bulbs with brighter LED lights, and add gates to crossings.” The statement also pointed to draft regulations for grade crossings.

With a report from Leslie Young