Engineers at a B.C. Crown corporation raised concerns about snow and ice falling from cables on the Port Mann Bridge more than three years before a winter storm caused just that, sending sheets of ice onto drivers on the newly opened structure.

According to documents obtained by Global News under the Freedom of Information Act, the Transportation Investment Corporation repeatedly questioned the bridge’s safety in the years leading up to its opening. Those questions persisted up until just before the structure, one of the largest in the world, was opened to the public.

But in the end, they trusted the opinions of the bridge designers and constructors and opened the bridge anyway.

In December 2012, weeks after the bridge officially opened, a snowstorm caused sheets of ice to fall onto cars below – smashing windshields, ripping side mirrors and injuring at least one person. At least 350 vehicles were damaged in total, according to ICBC.

Contractors Kiewit/Flatiron, for their part, say safety has been their “primary concern,” and they’re working with the province to ensure this doesn’t happen again.

In 2009 a panel of TI Corp. and third party engineers reviewing the bridge design asked in an email, “Has any measure been taken to prevent ice that potentially could be formed around the stay cables in the winter falling on traffic below?”

Much of the ensuing email chain has been redacted. But a handwritten note commenting on a redacted email reads in part, “but that could still fall onto traffic!” It isn’t clear who wrote the note.

A report from TI Corp. a few weeks later reads, “No precaution has been taken to prevent ice that potentially could be formed around the stay cables in the winter falling on traffic below.”

During a design review in the spring of 2009, TI Corp. asked contractor Kiewit and Flatiron Construction Corporation what precautions had been taken. In response, said corporation spokesman Max Logan, the contractor said the bridge’s “design had been undertaken with consideration of ice.” Specialized measures, including spacing cable anchors away from highway lanes and sheathing them in high-density polyethylene, were supposed to address any concerns.

Years later, questions about cable maintenance and the danger of falling ice remained. A November 2012 email with the subject line “Re. 1614 Port Mann Bridge – Vulnerability to Snow and Ice – Traffic Management Plan” reads in part, “I think we at TI Corp. needs to know how this is being handled. This can be a very sensitive topic and a safety concern … Snow could fall tomorrow before tolling commencement so there should be a plan now.”

The corporation sent Kiewit/Flatiron a question: How are the roadway hazards caused by snow or ice falling from cables addressed or minimized through the cable design?

The Port Mann Bridge’s designer, David Goodyear, responded: The design “utilizes a central pylon, which avoids a large cross frame over traffic that could be a platform for snow and ice buildup,” he wrote. “Stay anchorages are also outside the envelope of the travelled way, and the stay system does not use cross ties or any other clamping devices where details would capture accumulation.

“The above considerations minimize the effects of snow or ice accumulation for design,” he concluded.

That reassurance appears to have convinced the province.

“At that time the bridge designer confirmed again the inclusion of these design considerations to address the potential for ice accumulation,” Logan wrote. He later added, “Based on the information provided by Kiewit/Flatiron, during both the 50% design review and in advance of the December bridge opening, TI Corp had no concerns regarding the safety and performance of the bridge.”

But during that Dec. 19 storm, Logan wrote, “the bridge did not perform as expected.”

Abbotsford resident James Lepp was on the bridge that day, “dodging ice bombs” that took out the hood and side mirror of his car as he crossed.

“You put a lot of trust in these bridge builders and government who are putting these things together, that when you drive across the bridge, you don’t think you’re going to have ice falling on you,” he said. “Who knows what’s going to happen next winter.”

Amid the ensuing furor last December, Transportation Minister Mary Polak said the bridge “clearly … did not meet requirements” and that “taxpayers will not be on the hook for this.”

“Safety is Kiewit/Flatiron’s primary concern,” spokesman Tom Janssen said in an email to Global News Thursday. “We have worked closely with our partners TI Corp and the Ministry of Transportation to identify and implement the most effective methods to reduce the impact that adverse weather conditions may have on the Port Mann Bridge and the traveling public.”

Now, testing is under way to prepare hydrophobic coatings for the cables, in addition to sweepers that will be put in place full time this coming winter.

“It’s too early to tell what those final costs might be,” Logan wrote, “but Kiewit / Flatiron has assembled a team of engineers and experts to come up with these solutions and has done so at their expense. We are very appreciative of their hard work and the progress that has been made.”

Weeks before the bridge was scheduled to open, Transportation Investment Corporation asked the Port Mann Bridge’s contractors and designers if it was prepared for icy conditions: 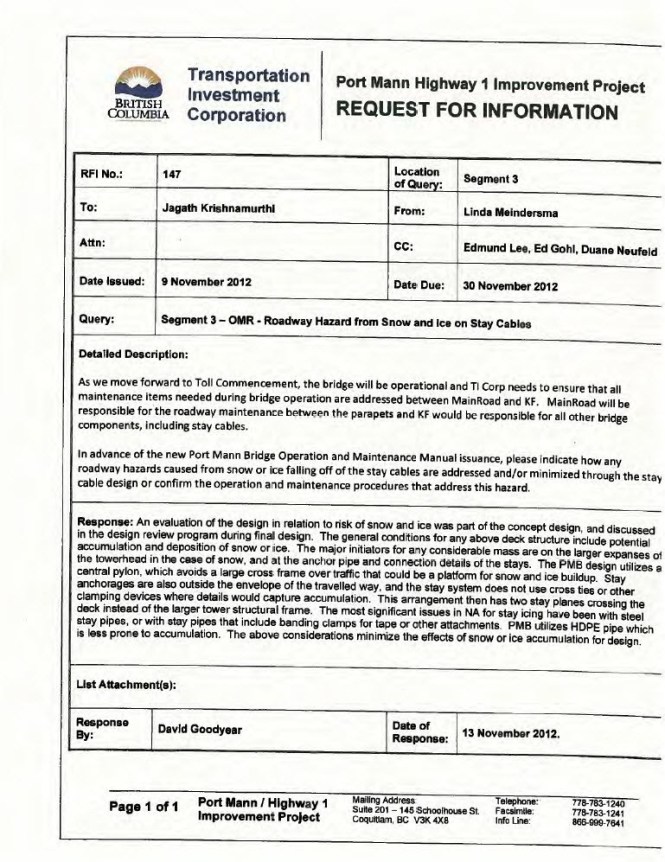