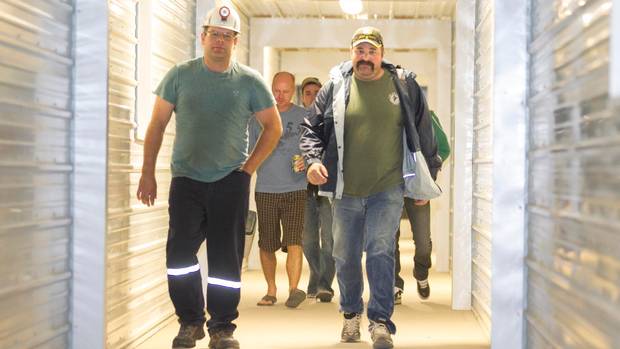 Darwyn Wirth was driving down a mine travelway a kilometre beneath the Saskatchewan prairie when he saw fire.

It was, he said, “a fairly large ball of flame.” Something had gone wrong deep inside the mine workings at Potash Corp’s Rocanville mine.

Mr. Wirth, a shift electrician, knew it was more than he could handle with a fire extinguisher. He retreated to a phone, notified the control room and sought safety in a refuge station.

Almost exactly 24 hours after his shift began early Monday evening, he emerged from the shaft, after workers put out the underground flames – which had erupted from a trio of cable reels – unscathed, and with a story to tell.

“There was two other gentlemen in the refuge station with me. We basically just spent time talking to each other, and at one we were allowed to call our spouses, which was nice,” he said.

Their discussion, he added, included “anything but fire.”

Eighteen hours after twenty workers were trapped in the potash mine, they’re coming up to the surface in groups – 15 mine operators at first.

“It’s been a long day,” said mill operations superintendent Terry Daniel. For rescue crews, it had started at 2 a.m. Tuesday when the fire started, then almost 12 hours as workers armed with foam and water fought a blaze of burning wooden reels wound with electrical cable. For hours after the fire was extinguished, they waited for the mine to cool and used massive fans to clear the air enough for it to be breathable.

“We’re very pleased: It seems like everything we’ve prepared for over the years with all our teams has happened much in the way it was anticipated,” Mr. Daniel told reporters at the mine site Tuesday evening. “Everything’s going to work out as we’d always hoped. Everyone’s going to come up fine.”

Nine people on the 29-person night shift, including two supervisors and three maintenance workers, were saved by mine rescue shortly after the fire began Tuesday, as workers outfitted in protective gear reached them in refuge areas whose air was fresh enough to make them accessible.

The twenty operators were in four refuge areas spread across an underground area of several kilometres. The refuge areas are sealed off from the rest of the mine and are equipped with water, canned food, bathroom facilities and landline.

The wooden reels of electrical cable at the centre of this fire are transported in the mine on steel skid plates like enormous spools of thread. In this case, a company spokesman said, the reels in question were being transported towards an area of the mine under large-scale expansion.

Fires in mines have become extremely rare, but not unheard of: A 2006 fire at Mosaic’s Esterhazy potash mine trapped 72 workers underground and temporarily shut down the mine’s electricity and phone lines, which meant no one underground could communicate with those on the surface, and fire crews didn’t know where the blaze was.

The last fire Mr. Perrin remembers at Rocanville’s potash mine would have been about 10 years ago, when a scoop tram caught fire. In the past, Mr. Perrin said, friction between the wooden reel and the plate on which it rested caused the wood to catch fire. To avoid this in future, the company put in place an expanded metal platform between wooden reel and steel plate.

As of early Tuesday afternoon, Mr. Perrin said, crews “know what’s burning but they don’t know how many of them, because smoke is very dense down there. … No one really knows for sure” yet what exactly precipitated Tuesday morning’s fire, he added. “I guess it got hot enough from the friction, it started to burn the wood. And here we are now.”

The Rocanville mine, located in southeastern Saskatchewan, produces standard and granular potash used in fertilizer and agricultural products.

It’s Potash Corp.’s second-largest mine by operating capacity, capable of churning out 2.7 million tons of the fertilizer per year, or about 23 per cent of estimated 2012 capacity. The company did not say whether the fire would hurt sales, but experts said that is unlikely because Potash Corp. has large inventories.