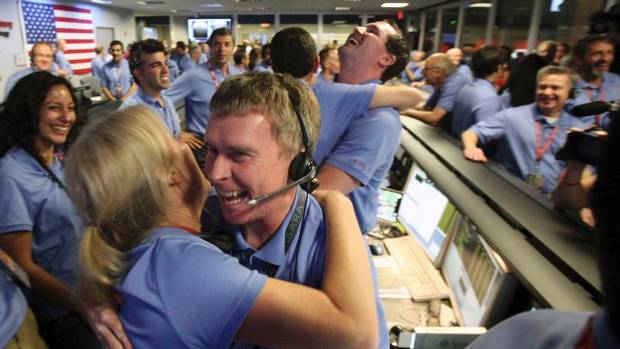 As he monitored NASA’s communications link with the rover Curiosity, he and a colleague sitting beside him at Mission Control noticed a fatal signal coming through, indicating a failure substantial enough to cripple the rover and derail a $2.5-billion mission eight years in the making.

“It was like watching a train wreck in slow motion,” Montreal-born Mr. Ilott told The Globe and Mail. “If it was true, there was nothing we could have done about it.”

It was a long 20 seconds before new signals indicated it was a false alarm and they could breath again.

Moments later, Building 230 of the Jet Propulsion Laboratory erupted. All who had been holding their breath exhaled, leapt up, hollered and hugged everyone in sight. People who had been watching the landing elsewhere on-site poured in, making an already crowded Mission Control even more crammed.

For millions of people watching Curiosity reach the surface of the red planet, it was a scene from science fiction. But for the dozens of people who had spent the past 20 minutes “chewing their nails off,” as Mr. Ilott says, it was the culmination of years of work, countless dry runs that had gone as well as possible.

The world caught a rare glimpse of the Jet Propulsion Lab this week, as images of elated people in blue shirts were seen on livestreams, in newspapers and on the screen in Times Square.

It was a chance to dispel what Mr. Ilott calls the Big Bang Theory stereotype – the idea that aerospace scientists and engineers are identical nerds with pocket protectors.

Truth is, the Jet Propulsion Laboratories site is more university campus than revenge of the nerds. People take papers or laptops to lunch on the lawn; you can wear shorts and sandals to work if you want to – and it’s Pasadena, Calif., so why wouldn’t you?

It’s the kind of environment where, on the most tense night of their careers, with everyone else glued to their workstation screens, someone will crack a joke: Oh, no, I forgot something – turn the rover around! Bring it back!

“There are plenty of nerdy people around,” Mr. Ilott allows, “but I would say aerospace people in general are pretty hip. They’re pretty creative.”

After they got their rover to Mars, the next stop for many was to a local pub whose owner had promised to stay open until 7 a.m. to serve the lab’s revellers.

No such luck for Mr. Ilott, however: As telecommunications lead for the mission, he’s among those responsible for ensuring various parts of the rover can talk to each other and to Mission Control – and that Mission Control can communicate back.

Sunday night was the first all-nighter of what will be several over the next three months. Mr. Ilott and others working on the mission are on Mars time. Their days are 39 minutes longer than those of earthlings.

But he isn’t complaining. The 56-year-old is living his childhood dream – just on a much smaller travel budget.

Growing up in Montreal in the heyday of the space race, he dreamed of becoming an astronaut, of following in the footsteps of earlier space explorers. He remembers thinking the X15 rocket that flew to the end of Earth’s atmosphere was the coolest thing imaginable.

Now, with a dozen years at the robot exploration capital of the world under his belt, he figures working with a rover on Mars is “the next-best thing.”

A little after 3 p.m. local time on Monday, Mr. Ilott is finishing up his workday. He will head home to sleep for six hours, then back to work midafternoon, Mars time.

“I’m mellow right now,” he says. And maybe just a little awestruck. “We did it. We did it. … It’s absolutely spectacular.”