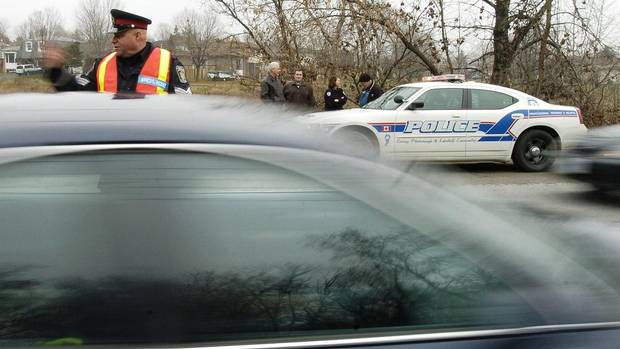 Financial showdowns between police and the cities paying them can be nasty. And they’re getting nastier: Across Canada, budgetary games of chicken are playing out between cash-strapped cities and police forces that argue they’re taking on more than they ever have – and need the cash to back it.

The mayor of Peterborough, Ont., has been locked out of two meetings of the police board, on which he sits, after a rare move by council to reject a funding request and slice the force’s budget on its own. Reports this week suggested the board may have asked Ontario’s Civilian Police Commission to remove the mayor entirely.

But behind the mutual acrimony is at least one thing everyone involved can agree on: Something’s got to give. The cost of officers to keep people safe is rising faster than inflation, faster than other public sector salaries and faster than most cities are expanding their tax bases.

That shift in perspective pitted Toronto’s police-friendly mayor against its police chief; it pushed the force in Prince Albert, Sask., to reinvent the way it deals with cases; Waterloo, Ont., police are working to save millions by eliminating what they believe are unnecessary demands on officers’ time.

Crime rates are down throughout most of Canada. But police say their job isn’t getting easier: If anything, they’re expected to shoulder more responsibilities. In many cities, they’re dealing with more cases of domestic violence than ever; they’re confronting people with mental illness who run afoul of the law. Police pick up the pieces when social services and safety nets fail.

“Public expectations towards the police have increased exponentially,” Peterborough Police Chief Murray Rodd said. “They expect us to get it right every time. … And it comes with a price.”

As is often the case with city services, demand is highest where the tax base is smallest: Police spend a disproportionate amount of time with the homeless, unemployed, mentally ill, poor and marginalized.

Ontario municipalities are calling on the province to change the way it settles disagreements over how much officers get paid: Existing arbitration often creates a cascading increase in compensation and salaries – costs that can eat up as much as 92 per cent of a police force’s budget.

Some want a much more serious overhaul. The quest to get a better bang for limited public-safety bucks is requiring police forces to get much more creative in the way they fight and prevent crime. “We’re maximizing the business model,” said Prince Albert Police Chief Dale McFee. “The balance comes in prevention and intervention – trying to invest smartly.”

Policing costs have caused friction before, but the 2012 budget is the first time the tussle has “raised its head publicly in Peterborough,” said Police Services Board member Robert Lightbody.

Police got a 5.7 per cent increase. But the ordeal left some board members feeling slighted – both at a perceived paucity of consultation and at Mayor Daryl Bennett’s strident approach to keeping costs down. (“I might have a reputation for being fairly direct and fairly outspoken,” he admits.)

But Mr. Bennett was surprised to find himself barred from two closed-door police board meetings because of a conflict of interest, he said: The meetings were about him. (Police board chair Nancy Martin wouldn’t comment on Thursday; Mr. Lightbody wouldn’t say what was discussed at the meetings, citing confidentiality)

“I find it to be very discourteous,” he said. But “I’ll stand by every statement that I made.”