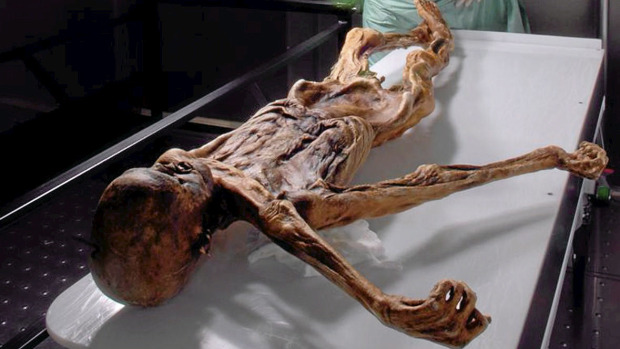 A few ground-up grams of spongy bone, drilled from a 5,300-year-old mummy’s right hip and painstakingly bathed, sequenced and analyzed, have yielded a near-complete genome of Italy’s Iceman. The discovery not only offers a glimpse into an early human ancestor, but also gives a fresh perspective on one of the leading causes of death in the 21st century: The Iceman had a genetic predisposition to heart disease

Otzi, as the Tyrolean Iceman is nicknamed, is a set of mummified human remains found in 1991 in Italy’s Ötzal Alps. The man, 46 when he died of an apparent arrow wound, has been a rich source of information on some of the earliest modern humans.

Mapping the Iceman’s genome is tougher than it sounds. While advances in biotechnology have made genetic sequencing very accessible, the endeavour gets far trickier when you’re mapping the genes of someone who was at his prime millennia ago, and has since been frozen, thawed, dug out and handled – however gently.

“Contamination is always a huge deal,” says Albert Zink, one of the primary authors of an article in Nature Communications journal, and head of the Institute of Mummies and the Iceman in Bolzano, Italy. “Anybody working with the mummy, who’s found the mummy … can bring their own DNA on it by touching or breathing on the mummy.”

Researchers drilled a tiny hole in Otzi’s right hip, through his denser bone to take a 50-milligram sample of the Iceman’s spongiosa – the spongy layer between outer bone and marrow, which in this case is now long gone. That spongiosa is placed in a sterile tube and then transferred to a lab designated specifically for ancient DNA, where it’s ground to a powder and put in a bath of salts and alcohol to separate DNA from other material.

Then comes the hard part: Matching fiddly bits of ancient, fragmented DNA into a multibillion-piece genomic jigsaw puzzle. Even with the most cutting-edge computerized sequencing technology, this took upwards of six months.

It’s one more step in the quest to untangle the origins of the human species: Many of the early humans who settled in Europe from the near east were subsumed by others. But thanks in part to tracing his Y-chromosome lineage, researchers now know Otzi is from the same genetic group as modern-day residents of Corsica and Sardinia. This gives researchers a direct genetic family tree to contemporary humans.

We now know that Iceman has brown eyes, not blue, as once supposed. O-type blood would’ve made him a universal donor for Neolithic blood transfusions. And he’s lactose intolerant. No surprise, Dr. Zink says: Animal husbandry and dairy consumption were still too new for milk digestion to be an evolutionary advantage.

The discovery has practical, contemporary implications: This is the oldest-ever evidence of a genetic predisposition to heart disease, previously considered a much more modern malady. But if people have carried the likelihood of cardiovascular illness in their genes for millennia, that could change the way the disease is viewed and treated in the 21st century.

“Maybe these results help a bit in the understanding of the development of such a disease,” Dr. Zink said. “People tend to believe such diseases are modern … and are only due to our modern lifestyle. Obviously this is not the case.”

The Iceman also had Lyme disease, and genetic information from the ancient bacteria could shed light on where the disease comes from and how it has evolved.

Brian O’Connor, a bioinformatics researcher at the Ontario Institute for Cancer Research, has a unique claim to fame: Using cloud computing and terabytes of data from the Mummies and Iceman Institute, he’s helped put the Iceman’s most personal details online for the public to see.

Genetic experts and neophytes alike can browse through Otzi’s genome at icemangenome.net. Mr. O’Connor’s open-source software SeqWar allowed him to run the raw genetic data through a series of analytic hoops, converting it into more accessible format online.

“This is a 10,000-foot view of the mummy,” he says. “It’s low-hanging fruit – something that anyone can log on to and start looking through.”