PICKERING, ONT. — Ontario nuclear plants are the first in their industry worldwide to test-drive a futuristic gizmo that measures employees’ concentration by reading brain waves.

The premise is deceptively simple: Use the electric current released by neurons firing in the brain to test, in real time, a person’s concentration level. And the device is strikingly svelte – this is no Medusa-like helmet of coloured cords strapped to your skull.

It’s a lightweight box, about the size of two decks of cards, that attaches via Velcro straps anywhere on your body. A trio of button-like prongs picks up the electric current travelling along your skin and measures the waves your brain activity creates – the higher the beta wave concentration, the higher your focus.

And in an age of splintered attention spans, says Rob Templeton, Ontario Power Generation’s lead auditor for operations, the imperative of teaching concentration is greater than ever.

“There’s talk of a cultural attention deficit, where we’ve got so many sensory inputs, we’ve got so much bombardment that takes place, it affects people’s ability to pay attention,” he says. “How do you pay attention? It’s never been a tangible, achievable thing – it’s just been something that we’ve said. And now we’ve come to a new point.”

Five years ago, Mr. Templeton was in charge of OPG’s operator training program when he heard that a kind of neurofeedback technology being used for children with attention-deficit disorder was also being used by NASA to measure astronauts’ level of concentration.

“If its original intent was to help astronauts and test pilots,” he says, “why not nuclear operators?”

The technology is the brainchild of Peter Freer, a North Carolina elementary-school teacher frustrated by stymied efforts to help students with ADD. It took 11 years and three jobs for him to scrape together enough cash to create a prototype for an educational program called PlayAttention. Mr. Freer was testing the technology on the U.S. bobsled team, with the same focus-boosting aim, when Mr. Templeton cold-called him. Could Mr. Freer whip up something like that for nuclear-plant operators?

Mr. Freer called back the next day. What ensued was years of back-and-forth on how, exactly, the device could be adapted to suit OPG.

Mr. Templeton wanted something as unintrusive as possible – normally, electroencephalograms are gathered through wires suctioned to the scalp, which can get in the way in a simulated nuclear control room. The result is a device called BodyWave. It weighs about 170 grams, can be strapped anywhere on the body and is eminently portable.

About 100 employees at the Pickering and Darlington nuclear plants, east of Toronto, have tested the device over the past year. People were skeptical at first, Mr. Templeton says, but “then they try it, and … it’s like, ‘Wow. This is really neat.’ ”

But it’s early days yet. OPG is rolling it out with the next class of trainee field operators in February.

In a large control room replete with buttons and flashing lights, the potential for attention problems doesn’t stem from boredom, Mr. Templeton says, but hyperarousal.

“There’s too much going on for their brain to deal with, cognitively. It divides their attention and it can impact their performance,” Mr. Templeton says. “We don’t pass people if they can’t perform in that type of environment. The downside for us is, we really need to be able to train and qualify enough people to do the job.”

Whether BodyWave works – that is, whether it actually improves employee focus and performance and, in turn, lowers a plant’s rate of human error – remains to be seen.

“We’re kind of marching ahead of the band here. We have to convince people this is viable … and to show that in the context of its cost, it’s effective.”

The program has cost OPG $50,000 to roll out, out of what the utility reports is a total $50-million training budget.

Some neurologists, however, think Mr. Freer’s claims are too good to be true.

“It sounds like science fiction. It doesn’t make any sense,” says Claude Alain, a scientist at Baycrest Rotman Research Institute. “The farther away you are [from the head], you will pick up a lot of interference. … I have a hard time imagining how it would work.”

Mr. Freer is not surprised by the skepticism. He insists his method works. “The method has to allow one to gather enough signal to make sense of it. … It’s like looking for a needle in the haystack. When you have a bunch of needles, you can filter out the hay.”

While he may do a peer-reviewed study, he says a clinical trial wouldn’t work: “It’s not a clinical device.”

Meanwhile, Mr. Freer has big plans. He says he’s already in talks with other nuclear plants, although he won’t say who. NASCAR started checking it out last year.

Mr. Freer just returned from a trip to a West Coast conference selling the technology to lawyers.

It can be a weird pitch to make – teaching an essential skill about which few people think twice.

“We think attention is innate, that we’re born with it,” Mr. Freer says. “And the fact is, we’re all born with the capacity to attend. … But attention is also taught. And, unfortunately, we don’t do that.” 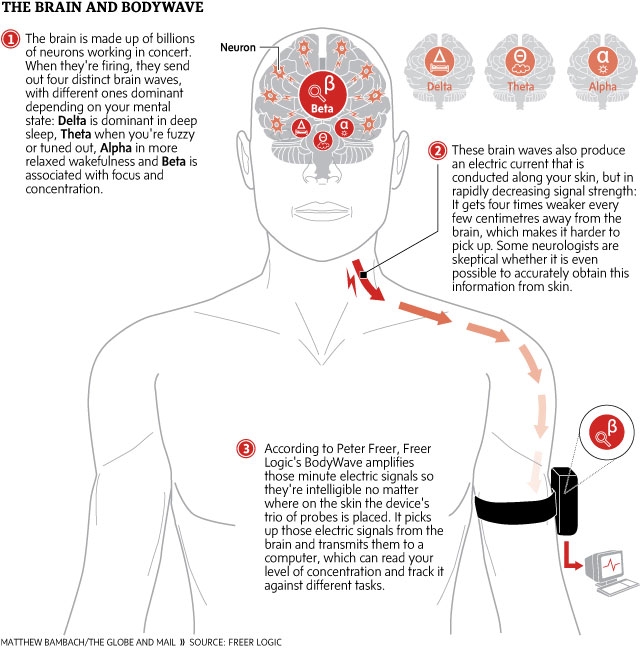