Photo by Chris Bolin for the Globe and Mail

Behind corridors lined with contemporary Canadian art, sitting at a dark wooden table in his downtown Toronto office, Ed Clark offers some economic advice that might not typically come from Bay Street.

Give the poor a tax break.

“I say, ‘Why don’t you cut the taxes of the most overtaxed people?’ It isn’t Ed Clark,” the Toronto-Dominion Bank CEO said in an interview earlier this year. “It’s the people at the low end, because they face the highest marginal tax rates.”

It may seem an uncommon prescription in his neck of the woods. But there’s an increasing awareness, among even the country’s most wealthy, that poverty reaches beyond the tables of the hungry and digs into their own pocketbooks.

When people are poor, out of work or homeless, it hurts the bottom line of all Canadians. And as the country struggles to maintain a shaky recovery amid growing global economic uncertainty, that’s not a hit they can afford to take.

If Ottawa and the provinces fail to make this a priority, Tory Senator Hugh Segal predicts, “over time, we will begin to run out of the money that we need to deal with the demographic bulge because it will be consumed in the health care requirements of the poor, which will increase. It will be consumed in the costs of the illiteracy and unemployment which relate to poverty. … And it’ll be unsustainable.”

It rang alarm bells at the Organization for Economic Co-operation and Development’s conference in Paris this week, where the think tank warned that if a slew of countries – from Sweden to Canada to the United Kingdom – don’t take drastic action by raising taxes for the richest, they risk runaway increases in inequality.

A World Economic Forum survey in January found its members see widening economic disparities as one of the main global risks over the next decade. An International Monetary Fund study in November linked growing income inequality with the kind of heavy debt loads that sparked the last financial crisis.

Canada’s polarized 41st Parliament reflects the country’s growing income gap. And Prime Minister Stephen Harper’s success in this election hinged in large part on his ability to play off fears of unstable prosperity.

Now, these 308 denizens of a redrawn House of Commons have their work cut out for them: Mind the income gap, or pay the economic penalty.

It’s already on the radar of some provinces: One of Christy Clark’s first actions as B.C. Premier was to raise the province’s minimum wage for the first time in a decade and offer a tax cut for low-income families. Ontario has launched a sweeping review of social assistance programs that Community and Social Services Minister Madeleine Meilleur has admitted are failing the province’s neediest.

VanCity started a $3-million recessionary “economic recovery fund” to give its members added leverage to pull their way out of dire financial straits. It wasn’t only a charitable move, Ms. Vrooman said. It made business sense.

“The way we do business affects the economy not only in terms of profitability,” she said, “but … how able the people who use our services are to continue to do that in the future.”

Despite Canada’s reputation for a strong social safety net, the country is becoming economically polarized. And the decades-old dominant economic dogma that growing wealth among society’s highest earners would trickle down to those less fortunate is being challenged by an alternative approach: Eliminate crushing poverty among the lowest earners, and wealth will trickle up.

The recession widened the chasm, and a subsequent recovery hasn’t closed it.

While economic slumps tend to hurt those already vulnerable, this one has been especially deep and especially unequal in who recovers: On paper, almost as many jobs have been added as were lost during the financial crisis. But they offer fewer hours and less pay – and some of the hardest-hit sectors aren’t coming back.

Previously steady employment growth stalled in March, when Canada’s economy lost 1,500 jobs. While the unemployment rate dropped slightly, that was because people were leaving the job market, not finding work.

Food bank use hit a record high in 2010. Tellingly, more of the people using those food banks have jobs – they just don’t make enough to pay the bills or feed their families.

The ranks of the working poor have swelled as minimum wages fail to keep pace with rising costs and social assistance levels drop.

“The economy took a hit and then is coming back up,” TD’s Mr. Clark said. “But what Canada’s economy will look like coming out of this is different than when we were coming in to it. The result of the shift in world economic conditions … all means that the skill sets you need are shifting. Globalization is good for the world as a whole, but its benefits are not equally distributed.”

Tony Masciotra is diversifying himself.

The Argentine-Canadian father of two went back to school immediately after being laid off from his tool and die job at Ford Motor Co. in Windsor three years ago.

“I have records of over 100 jobs I have applied for,” he said. “I have looked really hard. … But I haven’t been able to get a job yet.

“Windsor,” he noted, “has been a really tough market for trying to secure a job.”

Thanks to his wife’s part-time income as a cashier at Shoppers Drug Mart, they’re doing okay. At 11 and nine, he said, children Julia and Dante – “yeah, like Alighieri” – are old enough to know not to ask for extras. But “the hardest part, for me, is telling the kids ‘No’ sometimes.

“We haven’t missed a day. The bills are paid, we have food and shelter. But we haven’t made any gains. We haven’t improved in any way,” he said.

“This is not sustainable, the way we’re living. … We definitely need to secure a job. Now.”

Mr. Masciotra is part of a growing group of skilled labourers on the brink. The métiers in which they’ve worked for years are no longer economically viable: Many well-paying blue-collar jobs are being replaced by minimum-wage, service-sector ones. And that’s causing significant shifts on both sides of the border, notes MIT economist David Autor.

It gets more complicated, and more economically detrimental, if the people who’ve lost jobs aren’t the ones being hired to new ones.

They enter what Robin Somerville of the Centre for Spatial Economics calls “structural unemployment.” And if they leave the workforce entirely, they fall off the radar of unemployment stats: The numbers look better precisely because they’re worse.

That’s what’s happening now. While unemployment is dropping, the proportion of the population with jobs hasn’t risen. From a multidecade high of 63.5 per cent, Canada’s employment-to-population ratio dropped to 61.6 per cent in 2009.

“That has real cost because those individuals don’t pay taxes,” Prof. Autor said. “It means GDP is going to be lower because there are fewer people working.”

The drop is even more significant because more Canadians are putting off retirement. That should mean more people in the workforce. But it doesn’t: So many younger workers are dropping out entirely that they outweigh the older ones sticking around longer.

Mr. Somerville predicts it will take a decade, “or perhaps much, much longer,” to regain that 2 per cent. In the meantime, factor in hits to productivity, GDP and consumer spending.

“If you’re losing opportunities in some areas, and you’re not replacing them with opportunities of equal or greater value, then the overall level of income in the economy is reduced. And the ability of people to go out and buy goods and services is reduced.” 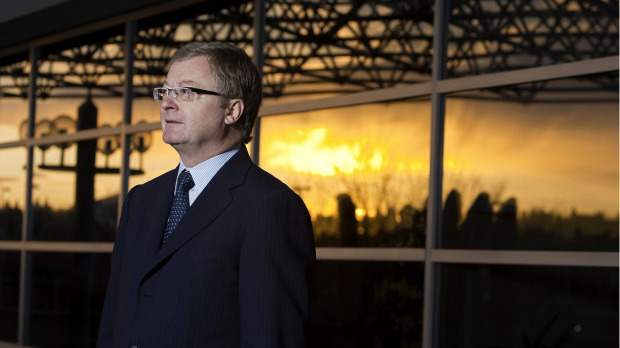 TransAlta CEO Stephen Snyder crunched the numbers and realized it was far cheaper to house people permanently than to pay for emergency services for the chronically homeless.
(Photo by Chris Bolin for the Globe and Mail)

The ripple effects: How homelessness hurts your bottom line

From TransAlta CEO Stephen Snyder’s office in a gentrifying downtown Calgary neighbourhood, you can look out and see the trendy Hotel Arts and Saint Germain restaurant – and, kitty-corner, a cluster of under-resourced and overflowing emergency shelters and drop-in programs.

Boomtown Calgary, which for years led Canadian cities in economic growth, also had the dubious distinction of having the country’s fastest-growing homeless population – a 30-per-cent increase in two years.

“In 2006, virtually everybody knew somebody who was struggling to pay for housing,” said Tim Richter, former head of government relations for TransAlta and now president of the Calgary Homeless Foundation.

By 2008, the number of people “sleeping rough” on Calgary’s streets outnumbered those in London, England.

Homelessness costs taxpayers money – in both foregone wealth and social service spending. As evidence of the social and financial costs of inequality mounts, a growing body of research indicates paying to get people out of poverty can be an economic boon.

Calgary’s business community crunched the numbers: It costs four times more to pay for a year’s worth of emergency shelter, emergency-room medical care and law-enforcement for one homeless person than it costs to fund that person’s supportive housing for a year.

More recent figures have backed them up when it comes to the costs of poverty: A study earlier this year from Toronto’s St. Michael’s Hospital found homeless patients cost hospitals an average of $2,559 more than their housed counterparts.

At the same time, research into projects that guaranteed people a minimum annual income indicated savings in everything from social services and health care to law enforcement.

Some see a solution in a 40-year-old experiment: In the 1970s, Manitoba wanted to see what would happen if it guaranteed poor people in a few communities a set annual income.

The philosophy behind this is simple: People are more likely to stay in school, out of emergency rooms and out of jail; they contribute to the economy through their purchases; they’re more likely to move eventually above the poverty line and pay taxes.

For years, Senator Segal has been campaigning for the country to implement something similar – replacing welfare programs by giving a top-up to bring low-income families above the poverty line.

The issue came to the fore in last month’s election campaign, kind of: The parties squared off on a guaranteed income program for low-income seniors.

The irony is that Canada already scores high compared to other OECD countries when it comes to helping the elderly. Where it falls short is where it matters: The working-age poor – the ones who should be contributing to the economy.

“With respect to working-age poverty, our numbers are really bad,” Mr. Segal said. “And that’s where we need to do more.”

“I don’t think we should underestimate the uneven effect of this recession,” said Anne Golden, CEO of the Conference Board of Canada. “The gap is growing. If the gap gets too big, that affects the quality of life for all of us.”

In Boomtown Calgary, "virtually everybody knew somebody who was struggling to pay for housing," says , says Calgary Homeless Foundation President Tim Richter. "And that really made it a public issue: It was very real for a lot of people. So even if you had your own home, you knew somebody who was struggling to pay rent or pay the mortgage.
"I did, everybody did. A lot of people just got priced right out of the market."
In 2008, the number of homeless people "sleeping rough" on Calgary's streets outnumbered that same number in London, England. So Mr. Richter and several other Calgarian businessmen crafted a strategy to fix that.
"We know there's a way to fix this, and we know it's more expensive to leave alone than to fix, so what are we waiting for?"
(Photo by Chris Bolin for the Globe and Mail)

Estimated amount for emergency shelter, emergency hospital care, law enforcement and other social services for one homeless person in Calgary, for one year

Estimated cost to proide supportive housing for one person in Calgary, for one year