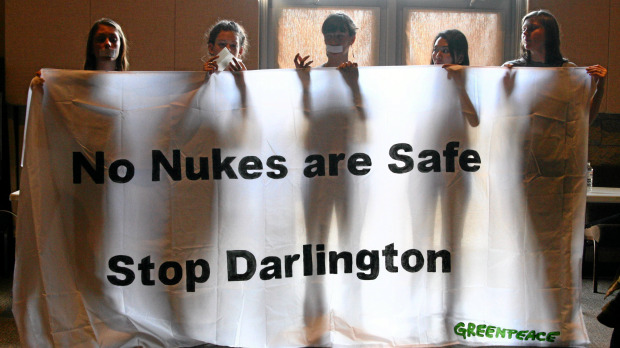 Greenpeace protesters hold up a banner to disrupt the second day of hearings into four proposed nuclear reactors in Ontario.
(Photo by Anand Maharaj/The Canadian Press)

Nuclear energy operators should prepare to face greater scrutiny and meet higher demands for safety precautions after the crisis in Japan, according to one of the industry’s major Canadian players.

“I would expect some changes; I just don’t know what those changes are,” says Alun Richards, a spokesman for Areva Canada, the nuclear developer whose operations range from mining uranium ore to building reactors and storing spent fuel.

Areva is preparing a feasibility study into Nunavut’s first uranium mine, at Baker Lake, even as community consultations this month reveal mounting opposition to the proposal.

In Quebec, the opposition Parti Québécois has suggested shutting down the plant the province was supposed to spend $2-billion refurbishing.

From Baker Lake, Nunavut, to Gentilly, Que., concern surrounding Fukushima is raising old fears about nuclear power and threatening to slow down or halt projects altogether.

Images of white-suited inspectors holding Geiger counters up to toddlers – and an expanding radius of irradiated Japanese terrain – do little to inspire confidence.

“I think people are realizing that technology and human control … related to nuclear power and radiation are still very limited. It’s a stark reminder that exposure can happen,” said Sandra Inutiq. The Nunavut lawyer said people have only recently started to voice concerns about the Kiggavik project, which would mine an estimated 44,000 tonnes of uranium ore near Baker Lake.

Players in Canada’s industry say they get the message – residents, regulators and governments are less willing than ever to take the safety of power plants and uranium mines at face value.

The irony is, much of what could reassure the squeamish or skeptical – better self-policing and technology, almost failsafe reactors – can also make nuclear power prohibitively expensive.

That’s a problem for an industry that’s capital-intensive to begin with, said Tom Adams, a Toronto-based energy analyst. Forty-year-old plants like Fukushima Daiichi are popular because they’re cheap, productive and relatively easy to maintain. But as this month proved, they’re also prone to failure.

Areva CEO Anne Lauvergeon used the safety concerns to tout the technology of Areva’s latest plant, which was deemed too expensive for a Dubai project it lost to Korea’s Kepco.

“At one time, [Areva’s technology] was criticized for being too safe,” she told reporters in France last week. “That is over.”

But if closer scrutiny and a shorter lifespan for aging reactors are inevitable results of Japan’s nuclear crisis, Mr. Adams said, that makes for a much tougher business case.

“They may be able to regain the public’s trust, but they’re already in trouble with the customer’s trust,” he said. “To have a successful industry, it’s got to be a package deal. … The ‘nuclear renaissance’ was in trouble before March 11. Now, it’s over.”

George Bothwell, vice-president of external relations for AECL, said it’s still too early to tell what effect the Fukushima crisis will have.

“The sales and construction process in the nuclear business runs into the decades, and frankly six or seven days into this we’re not even in the position to speculate,” he said. “It’s just too early for us to tell something like that. We’re just like everybody else in the world, just watching this unfold.”

The governments of Canada’s nuclear provinces, for their part, have made clear they aren’t ruling out nuclear power amid concerns over Japan’s crisis.

“Our responsibility is to ensure that we draw upon all the global expertise and draw what lessons we can from the Japanese experience,” Premier Dalton McGuinty told reporters on Tuesday. “We’re not rushing into this. If we need to take more time, we will do that.”

But he had little sympathy for the Greenpeace protesters arrested after chaining themselves to a stage in an attempt to delay hearings on a multibillion-dollar project to build Ontario’s first reactors since the 1980s.

“They would prefer that we have no nuclear generation in Ontario whatsoever,” Mr. McGuinty said.

“If there’s one thing I won’t do,” he said, “it’s make a decision like that based on a headline in a newspaper or one single event.”

One person who isn’t worried is the man whose tiny Saskatchewan town has volunteered to store nuclear waste below ground indefinitely.

With reports from Karen Howlett in Toronto and The Canadian Press