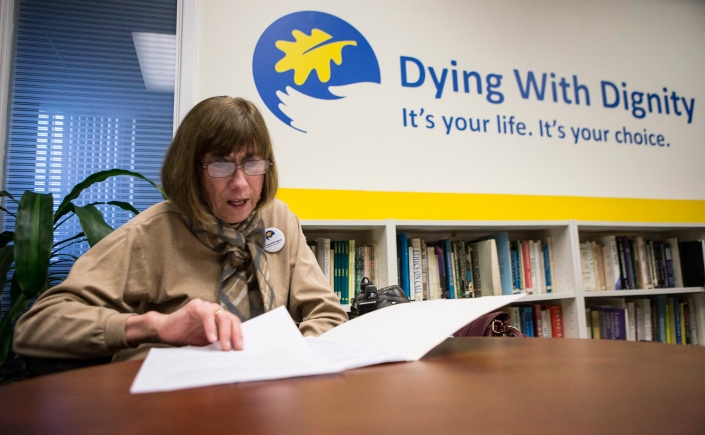 A quarter-century ago Sheila Noyes watched her younger sister die of breast cancer that spread to her spine. “It really did chew it up.”

She watched her mother die of a brain aneurysm and successive strokes that left her paralyzed — “trapped in a body that wouldn’t let her go.”

Now Noyes, riding a wave of optimism after chemotherapy to treat her own breast cancer appears to have done the trick, is exultant in the knowledge she won’t die the same protracted, painful deaths of these two women she loved.

“It is truly a beautiful and wonderful day,” she said.

“Both my mother and my sister would have been eligible for an assisted death. … They were locked in a hell that there aren’t any words for.

“I will have an option at the end of life my mother and sister didn’t have.

Noyes has worked with advocacy group Dying With Dignity for decades. “I remember promising my sister I would never stop, and I haven’t.”

So for her, Friday’s unanimous Supreme Court ruling striking down Canada’s ban on assisted suicide is a personal as much as a communal triumph.

“This is where the majority of Canadians are. This is what we want,” she said, citing the multiple polls that have found most Canadians favour some form of allowing physicians to help suffering people choose to end their lives the way they want.

Noyes has no plans to die any time soon. But “just knowing the option is there gives me great peace of mind. …

“I just feel at peace knowing I won’t have to suffer like that.”

Linda Jarett has a loving husband, two children, two grandchildren and a third due this summer. She retired from her teaching career years ago.

And she wants to decide when she dies.

Sixteen years ago, at age 50, Jarett was diagnosed with secondary progressive multiple sclerosis, in which a person’s disability worsens over time.

“I am very grateful for the life that I’ve lived,” Jarett told reporters Friday. “But I’m now dealing with a progressive disease for which there is no known definitive cause and, at this point, no known cure.

“I am very much in favour of being in charge of the quality of my life. And I believe I’m the only person who has the right to judge what that quality is.”

Friday’s unanimous Supreme Court ruling striking down a federal ban on assisted suicide offers Jarett and others in her position the option of having a physician help them end their lives when they choose. (It remains unclear how — and whether — the federal government will rewrite existing law, and what kind of framework will be put in place to determine who is eligible for assisted suicide or how “competence” and ability to decide to when and how to die would be determined).

Jarrett admitted she’s considered suicide before, rather than allow herself to deteriorate and lose agency altogether.

“Before today’s decision, I was left in that quandary that others before me have found themselves of having to possibly hasten their own death while they were still physically capable of doing so,” she said.

“At this point in my life I am still relatively independent. But I know that can’t remain that way with my disease for all that much longer.”